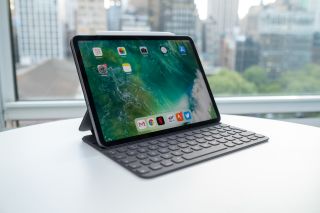 The iPad Pro 11 could soon be superseded (Image credit: TechRadar)

We recently heard lots more details about Apple’s rumored AR glasses, but it seems it’s not just glasses that Apple is focusing on with augmented reality, as the next iPad Pro might pack a 3D sensor system of its own, allowing you to create 3D reconstructions of rooms, people and objects.

That’s according to “people familiar with the plans”, speaking to Bloomberg. They added that the new iPad Pro will have two rear cameras, up from just one on the iPad Pro 11, and that it will additionally have a small hole for this 3D sensor system.

However, if you were hoping to get your hands on the slate soon you might be out of luck, as while it has now been a year since the iPad Pro 11 landed, these sources claim that the next iPad Pro will land sometime in the first half of 2020, meaning it could still be months away.

Apparently this same sensor system will then arrive in high-end iPhone 12 models when they launch, likely in September 2020. Those phones will also apparently support 5G, which is something we’ve heard a number of times now.

Then, following that, Apple will apparently bring out “a combined VR and AR headset with a focus on gaming, watching video and virtual meetings”.

We heard about this recently, with a previous report saying it will land in 2022. Bloomberg doesn’t disagree, but says 2021 is also a possibility. In either case, this would be later than the 2020 launch that had been rumored for a while, but Bloomberg’s sources explain that Apple had apparently planned to launch the AR headset in 2020 originally, but recently decided to push it back.

Still, with so many devices apparently coming with improved AR skills, and with Apple apparently tasking around 1,000 engineers just to work on AR and VR initiatives, it’s clear that the company sees this as a big part of its future.