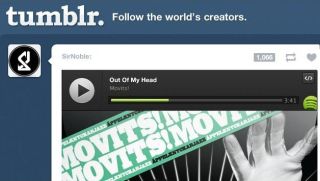 Spotify has announced that it is to bring its music service to all corners of the web, with the introduction of the Spotify Play Button.

Much like Facebook's Like button, the Play button allows blogs and websites to seed Spotify on to their site – offering up free streaming music to anyone who wants it.

Well, anyone who wants it and has a Spotify account.

To mark the launch, Spotify has mustered up a number of partners for the new button. These include: Tumblr, The Huffington Post, Time Out and the Guardian.

Speaking about the new Play button, Gustav Söderström, Chief Product Officer at Spotify, said: "Today we're giving every blogger and web editor the ability to light up the internet with music.

"Adding a personalised soundtrack to your website or blog has never been this easy."

Söderström continued: "You want to give your fans access to any song, album or playlist of your choosing and in its entirety, while ensuring people stay glued to your site. The Spotify Play Button does all of this for free, while making sure artists get paid for every play."

This is a massive move by Spotify and a bit of a slap in the face for piracy. Now that potentially thousands of sites can use Spotify's massive archive of music on their site, there's little need for illegal streams to appear.

The caveat is that the Spotify functionality can only be used by those who have Spotify - and if you are on the free version of the service, there's only so much of this content that you will be able to consume before your free minutes are up.

"Getting the Spotify Play Button for your website couldn't be simpler: just grab any song, album or playlist URI from within Spotify and head to our developer website to get the embed link," explained Spotify about the new button.

Head to www.spotify.com/uk/about/play/ for more details.