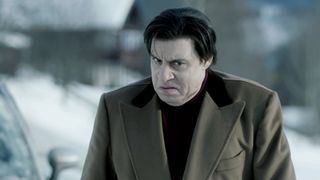 Lilyhammer - worth the wait?

Netflix will be bringing its original series Lilyhammer to the UK after it has aired on BBC 4.

Lilyhammer is the first show that Netflix commissioned in order to reduce its reliance on licensing deals with movie studios and television production companies.

It aired in the US earlier this year, debuting on the Netflix site rather than traditional television, but in the UK the series won't be streamed online until after the series has aired in full on BBC 4.

The BBC has also snapped up the rights to the second season which Netflix is set to co-produce.

If I had a hammer

Lilyhammer stars former Soprano Steven Van Zandt as a mob boss who rats on an associate and is relocated to Lillehammer in Norway as part of a witness protection deal.

There are eight episodes of the critically acclaimed and in no way inspired by The Killing series for UK viewers to look forward to – the US, Norway, Canada and Latin America have already seen it, the lucky devils.

What's next on Netflix's growing production schedule? Well, it's not Terra Nova, sorry geological drama fans, rather a new series of the thoroughly wonderful Arrested Development.