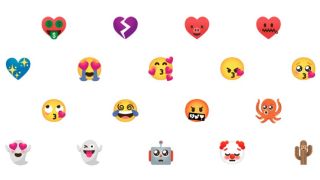 Do you like using emoji? Or feel like no emoji truly captures the nuanced, hard-to-define nature of your soul? A new custom emoji feature on Android phones could be the thing for you.

Google has named the feature 'Emoji Kitchen', given it lets users create 'recipes' of their favorite emoji, combining different expressions, faces, and objects in chaotic and highly random ways.

When messaging on an Android phone, tapping on any emoji on the Gboard (you know, the menu pane full of emoji?) will bring up a host of combo emojis to help you communicate with your friends in your own, unique way.

Want to put glasses on a monkey? A face on a cactus? Existential pain on a robot? You can do all the above and more – across messaging apps including Gmail, Messages by Google, Facebook Messenger, WhatsApp, Snapchat, and Telegram.

"With Emoji Kitchen, your phone’s keyboard becomes an even richer canvas for expression," said Google in a press release.

It's a wildly entertaining change, and is a sign of the unending appetite we message-addicts have for a wide range of emoji – coming not long after the Unicode Consortium announced a host of new emoji icons for 2020, including the trans icon and, for some reason, the dodo.

The Emoji Kitchen feature does seem awfully similar to the Emoji Mashup Bot, which is a Twitter bot that's been (brilliantly) combining emoji icons since July 2019 – as you can see below...

The Emoji Kitchen feature is currently in beta, though you can head to the Gboard beta tester page to be one of the first to try it out. You can bet we are too.