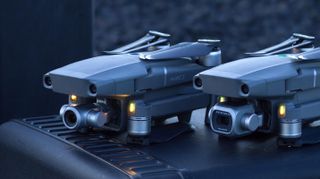 Drones haven't had the best reputation since the infamous Gatwick UK incident of December 2018, when an apparent sighting caused three days of travel chaos, but a new DJI app is hoping to restore public faith in the flying cameras by letting anyone with a smartphone identify nearby drones.

The Chinese drone maker will be releasing a free smartphone app in 2020 (once it gets regulatory approval) that will let anyone track and log crucial info about drones that are within a one kilometer (0.62-mile) range.

The info you'll be able to glean will include the drone's ID number, as well as its location, speed, altitude and direction. This will work for all recently-released drones, not just DJI-made ones.

The idea is to reduce fears about menacing, untraceable drones, and presumably give the public the option to report drones that are breaking the Drone Code or flying in dangerous areas to the local police.

DJI says the drone-to-phone tech used (called Remote ID) gives drones a similar level of identification to cars and vehicles. DJI Vice President of Policy & Legal Affairs Brendan Schulman said: “Remote ID functions as an electronic license plate for drones, allowing anyone who is curious about a drone in the sky to learn more about what it’s doing".

The PR battle in the sky

The news comes just two weeks after the UK's CAA rolled out its new license program, which makes it illegal for anyone with a drone that weighs over 250g to fly without a license that costs £9.

While not a new idea – DJI developed a tracking system called Aeroscope in 2017 that wasn't widely adopted – an app like its upcoming one could help boost public confidence and prove drones aren't the unregulated, wild west that media reports often portray them to be.

Consumer drones like the DJI Mavic 2 Pro, which have built-in safety systems and geofencing that prevent them from taking off in dangerous areas, aren't generally considered be much of a safety risk compared to homemade, DIY flying machines.

DJI also recently wrote a strongly-worded open letter to the BBC criticizing its Panorama program for "falling short of informing and educating viewers in an impartial and accurate manner", due to the lack of physical or photographic evidence that a drone was actually a cause of the UK's Gatwick disruptions last year.

So while the forthcoming app might not be of huge practical use to the public, it is a useful tool in bolstering drones' reputation, which have been growing in sales and popularity since 2018 despite a few much-publicized safety incidents.