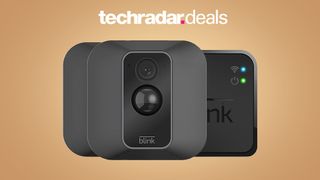 This year's Amazon Black Friday deals are nearly here, but if you've been thinking about investing in a home security camera setup there's no need to wait – you can already get a great deal on this two-camera Blink XT2 system.

Blink, owned by Amazon, already offers some of the best value security cameras around, and this price makes them even more appealing. Unlike previous Blink devices, this pair offer two-way audio, so you can hear and speak to anyone who triggers their motion sensors using the Blink app on your phone or tablet.

The motion detection is smart too, so you can choose which zones are monitored and only receive notifications when the cameras detect movement there. They also work with Alexa, so if you own an Amazon Echo Show or Echo Spot, you can simple say 'Alexa, show me the front door camera' to see who's waiting to be let in.

Both cameras are robust and weatherproof, so you can mount them indoors or outside, and they'll capture crisp footage night and day. They're completely wireless, so setup is effortless, and there's no monthly subscription fee to worry about. What could be easier?

Blink XT2 security camera system: £134.99 at Amazon
Save £43 on this smart home security system, with two weatherproof cameras to monitor your home inside or out, plus a Sync Module so you can add more cameras in future. They're easy to set up, with no wires, two years of battery life, and no subscription fees.
View Deal

If you only need to keep an eye on the inside of your home, Amazon has also slashed the price of indoor Blink camera kits. These are available with one, three or five cameras, and if that's not enough you can also pick up extra cameras individually to cover extra rooms.

You don't get two-way voice communication with these cameras, and they're suitable for indoor use only, but with prices starting at just £60, these are likely to be some of the most affordable home security starter kits we'll see this year.

Blink one-camera system: £59.99 at Amazon
At under £60, this home security starter kit is great value ahead of Black Friday. It includes one Blink indoor Wi-Fi camera, plus a Sync Module so you can connect more cameras later. It captures 720p footage, and sends alerts directly to your phone when triggered.
View Deal

Blink two-camera system: £104.99 at Amazon
If one wireless indoor security camera isn't enough, Amazon has also cut 25% off a pack of two, plus the Sync Module. With Alexa support you can tell your Amazon Echo Show or Spot which one you'd like to see footage from and see it on-screen straight away.
View Deal

Blink three-camera system: £149.99 at Amazon
For just £45 more, you can throw one more security camera and monitor three different rooms from the comfort of your phone or tablet. Just stick them to the wall or place them on a ledge, and you're ready to start keeping an eye on your home from anywhere in the world.
View Deal

Blink five-camera system: £217.49 at Amazon
If your home is on the larger side, a security camera system could be expensive. Not with this five-camera pack from Blink, which has received a generous £72.50 price cut in Amazon's Countdown sale. That's less than £44 per camera – and you get the Sync Module to connect them all.
View Deal

Blink add-on security camera: £52.49 at Amazon
Extend your Blink security setup with an extra indoor camera to keep watch over your home. It will record a short clip of video when its motion sensor is triggered, upload it to the cloud, and send an alert to your phone.
View Deal