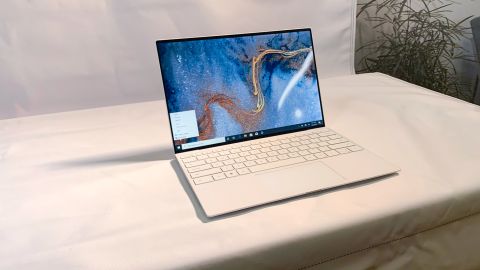 The Dell XPS 13 is still a laptop to beat in 2020, but some of its missteps mean that other lightweight laptops are close to catching up.

Every year we get a new Dell XPS 13, and 2020 is no different. However, there are a ton of thin and light 13-inch laptops around these days, thanks in large part to the work Intel has been doing with Project Athena to make computing more portable. Dell has a lot to prove if it wants to keep its position at the top of the laptop pile.

For the most part, our limited hands-on experience with the Dell XPS 13 does suggest that this model is just as good as previous entries in the series, but the low-end entry model means that a lot of mainstream buyers may be in for a less-than-ideal experience.

The new Dell XPS 13 launches during the CES 2020 expo on January 7, and if you're looking to get your hands on it, you're looking at a price of $999 (about £890, AU$1,420). That seems in line with other premium Ultrabooks – at least until you take a look at what the entry level model is packing specs-wise.

That entry-level XPS 13 has an Intel Core i3-1005G1, 4GB of RAM and a 256GB SSD. You read that right, for $999 (about £890, AU$1,420) you're only getting a measly 4GB of memory. This is frankly an embarrassing choice on Dell's behalf, as you can get a laptop with double or even four times the memory for the same price, many that are extremely well designed, too.

We don't have exact pricing for the Dell XPS 13's other configurations yet, but if it's anything like the 2019 model, you'll be paying at least an extra $200 (£200, about AU$280) for a version of the XPS 13 that will be sufficient for getting any kind of work done. In fact, because of this pricing structure, we'd almost say that the Apple MacBook Air provides better bang for the buck, and that is definitely saying something.

If you're after a premium laptop, the Dell XPS 13 definitely will provide that experience if you go for a higher-end SKU. However, if you're on a budget and can only afford that entry level model, you should absolutely look elsewhere.

The 2020 Dell XPS 13 is certainly an attractive Ultrabook – which we expected – though after not using an XPS laptop for a while we were still taken aback by just how gorgeous this piece of hardware is.

The new Dell XPS 13 is, as a surprise to no one, an extremely thin and light machine. Dell has managed to make this laptop just 0.58 inches (14.8mm) thick, weighing just 2.8 lbs (1.27 kg) for the touch-enabled model. This makes for a device that will be extremely easy to carry around with you. Laptops are getting thinner and lighter with each passing day and this new XPS 13 is definitely no different.

The entire laptop is made out of CNC machined aluminum with carbon fiber on the keyboard deck, which combines to produce a laptop that exudes luxury. Resting our hands on this laptop assured us that the typing experience would be comfortable even over long periods of time.

The keyboard only serves to reinforce this idea, too. We don't know what it is, but Dell continues to provide some of the best keyboards in the game. Travel feels nice and deep (even if it isn't actually deep), and the keycaps are spaced out perfectly.

Another huge victory for the Dell XPS 13 is the display. The bezels are somehow even thinner than before with a gorgeous display that really pops out at you. The model we got to see ahead of CES was 4K, and it definitely looks like it. If you need to do photo or video work on the go, this display should be able to keep up with anything you throw at it.

Luckily, Dell has avoided the temptation of completely cutting out ports, but only just. You get two Thunderbolt 3 ports, a Micro SD and a headphone jack, which means you should be able to use this laptop for plenty of things without needing an adapter. That is, however, unless you have a lot of legacy USB-A devices, but the industry is unfortunately trending in the direction of killing older ports.

We obviously won't know how the Dell XPS 13 performs in the real world until we get it in for review, but looking at the specs reveals a respectably high-end piece of equipment – as long as you don't go for that entry-level model.

Again, that entry-level entry features a 10th-generation Core i3 processor, 4GB of RAM and a 256GB SSD. That 4GB of RAM will likely hold back this laptop in even the most basic of tasks, especially as Windows 10 prefers to run on at least 8GB of RAM. If Dell is this attached to the starting XPS 13 having this level of hardware, perhaps it should make an XPS Chromebook instead. At least then it would be usable.

However, at the high end, you can configure this laptop with a 10th-Generation Core i7 processor, 32GB of RAM and a 1TB SSD. We don't have the pricing for this version, but with these kind of specs, you should have no problem running even the most memory-hungry pro apps.

Dell is claiming that this new Dell XPS 13 can get up to 19 hours of battery life, which would be huge if true. We're not sure whether or not this laptop can actually reach that number, and can't wait to put it to the test. However, with only a 52Wh battery, we're definitely curious what kind of engineering wizardry Dell did to reach this number.

At the end of the day, as long as you're not going with the entry-level Dell XPS 13, it should be fast enough to power you through pretty much any every-day workload. And if you need a workstation that is this thin and light, the XPS 13 could be a great choice as long as you're willing to sacrifice some legacy ports in the name of portability.

The Dell XPS 13 2020 is still one of the laptops to beat, as it's one of the most premium Ultrabooks in the game. The world of laptops keeps getting more competitive though, and some of the more controversial aspects of the laptop may hold it back from retaining our number one slot: namely the underpowered entry-level model and the bottom-mounted speakers.

Still, if you're after an attractive Windows 10 laptop and you have the money to spare, the Dell XPS 13 2020 will likely remain one of the best laptops on the market. Just avoid that entry-level version if you can.