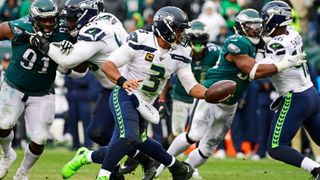 The NFL Playoffs are here and closing out Wild Card Weekend will be the Philadelphia Eagles looking for revenge after suffering a terrible loss to the Seattle Seahawks in week 12. We’ll help to make sure you catch every minute of today’s game - see how to get a Seahawks vs Eagles live stream online regardless of where in the world you are and it’s even free to watch in the US thanks to a simple stream.

Seattle Seahawks vs Philadelphia Eagles - when and where?

The Seattle Seahawks will take on the Philadelphia Eagles at the 69,000+ Lincoln Financial Field in Philadelphia, Pennsylvania.

Seattle ended the regular season 11-5 and the team is currently the No. 5 seed in the NFC playoffs.

The Seahawks have had their share of injuries this season which why they brought back Marshawn Lynch after losing their top three running backs. During last Sunday’s game against the 49ers, Lynch managed to score one touchdown during the fourth quarter but this wasn’t enough to defeat San Francisco and the Seahawks ended up losing the game 26-21. Will the Seahawks be able to defeat the Eagles a second time for a chance to go all the way to Super Bowl 2020?

Philadelphia managed to win the NFC East this season and the team is going into today’s game 9-7. Last Sunday the Eagles defeated the Giants 24-17 thanks to a field goal from placekicker Jake Elliott and two touchdowns from running back Boston Scott during the fourth quarter. The Eagles have also seen their share of injuries this season which is why Seahawks coach Pete Carroll has been preparing to meet a different team on the field than they did during week 12. Philadelphia has won its last four games against the Giants, the Redskins and the Cowboys and the team will also have the home field advantage, so expect the Eagles to put up a fight. Can the Eagles defeat the Seahawks in their second meeting this season?

Whether you’re a Seahawks fan in Seattle, an Eagles fan in Philadelphia or just want to tune in to catch all the playoff action at this NFL Wild Card Weekend - we’ll show you how to get a Seahawks vs Eagles live stream regardless of where in the world you are so you don’t miss a single touchdown.

Watching this game from the US, UK, Canada or Australia? We'll tell you how to catch the NFL game further down in the article.

But if you're somewhere else in the world - or if a coverage blackout is stopping you from watching in the US - then there's still a way you can live stream the Seahawks vs Eagles online (and you don't even have to slum it with a grainy, illegal feed you've found on Reddit). Instead you could use a VPN - or Virtual Private Network - to change the IP address to one in a different state or country which does have a stream. And it's not even hard to do.

From there, you simply open the VPN app, hit 'choose location' and select the appropriate location - it's super easy to do. Choose any country showing a live NFL stream and watch as if you were in that country.

If you live in the US and have a television, you’ll be able to watch this NFL game live as it airs on NBC. The network will show today’s Seahawks vs Eagles game at 4.40pm ET / 1.40pm PT.

Don’t have cable but still want to watch this game? Don’t worry as you can also stream this game for free on either your smartphone or tablet by downloading the Yahoo Sports app.

Not in the US tonight but still want to watch that free Yahoo Sports stream? Then get yourself a VPN to watch as if you were back in the States.

Can I watch with the NFL Game Pass?

Well it's a no and a yes. The NFL Game Pass in the US will only let you watch a replay of the game, but not the live action.

Interestingly, it's a different story with an International NFL Game Pass where all post season games are being shown absolutely live...shame you can't officially get access to that if you and your laptop's IP address is in the US.

Sling TV $40 per month - Sling TV splits its live NFL options across its $25 a month Blue plan and $25 a month Orange plan. By combining the two, you get a $10 dollar discount and access to Fox, NBC, ESPN and the NFL Network.

FuboTV $35 for the first month - FuboTV gives you the first month at a discounted rate but after that the price increases to $45 a month. The service includes CBS, Fox, NBC and the NFL Network but does not come with ESPN.

DirecTV Now $50 per month - DirecTV Now includes CBS, Fox, NBC, ESPN and for $5 extra you can add the NFL Network. However, with this service you can only watch football on local TV stations live.

YouTubeTV $40 per month - YouTubeTV gives you access to CBS, Fox, NBC and ESPN but just like with Hulu with Live TV, there is no NFL Network.

How to stream Eagles vs Seahawks live in the UK

If you want to follow your favorite NFL team through the postseason and all the way to the Super Bowl this year, then you need to know about NFL’s International Game Pass as it will allow you to watch every single remaining game for just £40.99 with the Playoff Pass.

If you don’t want to sign up for Sky just to watch this game, you can always watch it on Now TV with a Sky Sports day pass for £9.99. However, there are also weekly and monthly passes available if there happen to be other sports/games you’d like to watch as well.

Out of the UK this weekend? If geo-blocking is getting in your way of watching the NFL action then you could try downloading and installing a VPN as described further up the page. That will let you then change your IP address to the UK and watch as if you were sat back at home.

Get a NFL Wild Card live stream in Canada for free

Canadian viewers can watch today’s Seahawks vs Eagles game on TSN and the network will begin its coverage of the game at 4pm ET / 1pm PT.

If you’d rather watch this game online, on mobile or on your favorite streaming devices (via the likes of Apple TV, Chromecast, Amazon Fire TV, Android TV, Roku, Xbox One and PS4) then the streaming service DAZN has you covered. It costs $20 per month or $150 per year but there is also a FREE TRIAL available if you want to test it out for yourself to watch the Seahawks vs Eagles.

Live stream Seahawks vs Eagles in Australia for free

If you’re an avid American football fan that doesn’t want to miss any of the action during the postseason, then you need to know about the NFL’s International Game Pass. It’s the obvious first option that will allow you to view all postseason games and even the Super Bowl for AUD68.99.

Australian NFL fans will be able to watch today’s Seahawks vs Eagles game on 7Mate and the network will show the game at 8.30am AEDT on Monday, January 6.

Alternatively the over-the-top service Kayo Sports will also show the Seahawks vs Eagles game. The service costs between $25 and $35 per month depending on which package you choose but new customers can take advantage of Kayo Sports’ 14-day FREE TRIAL to watch today’s game.