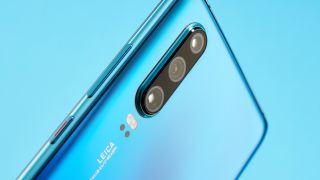 A few leaks now have suggested the Huawei P40 might have three rear cameras – that's the same number as its predecessor, the Huawei P30 – but a new render suggests the handset might gain an extra lens on the front.

This render comes from 'industry sources', close to 91mobiles, who shared the image. We can see the front, back, bottom and one side of the device in great detail, and while some of this lines up with previous rumors we'd heard, some of it is totally new.

The highlight here is the presence of only three rear cameras, which a previous rumor suggested, and which is a little bit surprising given we'd expect a newer phone to have more lenses than its predecessor.

Noticeably there are no square-looking lenses, which is also surprising as the Huawei P30 Pro's periscope zoom lens (and indeed most periscope lenses) have this design, but that could just be a rendering error.

There's something important on the front though, as we can see two cameras in a punch-hole cut-out segment at the top, much like the Samsung Galaxy S10 Plus but on the other side of the screen.

We'd expect one of these to be a 'standard' camera with a high resolution, and another to be a depth sensor of some kind, which would improve 'bokeh' background blur for better portrait shots.

Something else of note is the lack of a 3.5mm headphone jack, which the Huawei P30 had (although the Pro version didn't).

In general, though, this Huawei P40 render looks a lot like the Huawei P30, save for the specified differences and the camera bump (which has the flash alongside the lenses, instead of below them).

Hopefully, the device will be a bigger step up from its predecessor in terms of specs than design, but at the moment rumors are all over the place in terms of camera specifications and more, so we can't say anything for certain.

We'll find out more for sure come March, when Huawei has confirmed the devices will launch, but there will likely be more leaks before then, so stay tuned to TechRadar to hear more about all upcoming phones.