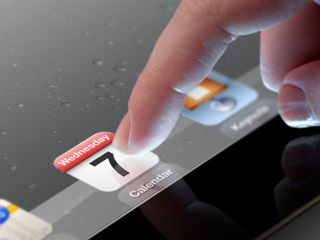 I had an odd dream last night. I was sitting in the auditorium, expectantly waiting for Tim Cook to grace the stage with his presence to launch the iPad 3, when I realised it was already in my hands and I was playing 'Snake' from an old Nokia phone on it.

But then the dream took a turn for the terrifying: the iPad started prodding me back, and then the snake emerged from the screen and ate my fingers. Still managed to get a high score, though.

While that's not likely to happen tonight (well, at least, I hope not… I've got a lift to get into and I don't want to push the buttons with my nose) the idea of the screen pushing back suddenly doesn't seem as unlikely as before.

According to The Guardian, Senseg (a company that uses advanced haptic feedback to bring more advanced touchscreen control) is likely to have licensed its technology for use in the iPad 3.

Well, it's mostly a 'no comment' accompanied by a playful wink from the directors of Senseg, but add that to the Apple invite ("We have something you really have to see. And touch") and it makes sense that something tactile is on the cards.

And it's very 'Apple' as an idea – taking the notion of touchscreen to the next level, with specific elements in the screen that provide more complex feedback depending on what you're virtually touching on the screen.

It would mean playing Angry Birds would result in fewer mis-fires, and media controls would be marked out more obviously on the screen, which would be pretty mind-blowing.

So – is the iPad touch really on the cards as a name? It would be an interesting gambit for a company that's all over the linear naming of its devices, as it becomes more like an 'S' update from Apple rather than the easier to understand notion of owning the iPad 'last-generation-plus-one', which is sadly the reason a lot of people upgrade, regardless of the specs.

But is it so crazy? Every Apple line of portable devices has suffered the same fate: the iPhone became lumbered with a moniker outlining the connection speed in the iPhone 3G; the iPod plus touchscreen became the iPod touch, so why couldn't the same notion be extended to the iPad?

Most of me still expects Cap'n Cook to take to the stage, whip the crowd into a fruit-based frenzy with a montage of people being extraordinary with iDevices then launch the iPad 3 as we expected only last week.

The iPad HD is still an outside bet of course – the idea of a Retina Display (or near as darn tootin' possible) would bring forth a terrific story around HD screens on the go.

But an iPad touch? It seems unlikely – the notion of being able to touch gadgets and make them do things we want is a bit archaic, especially by Apple's standards. Sure, it might be all haptic and fun to run your finger over, but as marketing campaigns go, even Apple would struggle to sell that one.