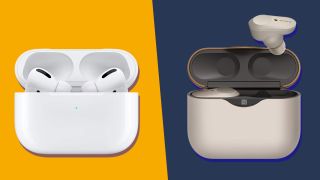 The Apple AirPods Pro are among the best pairs of true wireless earbuds you can buy right now. With great noise-cancellation, an improved design (compared to the original AirPods), and a snug fit, they’re hard to beat – especially if you’re a fan of Apple products.

However, the AirPods Pro aren’t perfect. They’re expensive and even the new and improved design doesn’t mean they aren’t prone to slipping out of place from time to time. Which is why, when it comes to the best wireless buds on the market, the Sony WF-1000XM3 wireless earbuds currently take our top spot.

We rewarded the Sony WF-1000XM3 wireless earbuds 5 out of 5 stars when we reviewed them in late 2019, thanks to their top noise-cancellation, solid audio performance and minimal looks. But given that they’re similar to the Apple AirPods Pro in many ways, the big question is: which pair of true wireless earbuds should you buy?

Of course, the answer will be different for everyone depending on your priorities and style. But below we’ve weighed up the pros and cons of each pair of earbuds based on key factors, like design and sound performance. Read on to find out which pair of true wireless earbuds we think reign supreme.

That means they’re not meant to be a direct replacement for the 2019 AirPods. But is that big price hike worth it? When we compared the Apple AirPods Pro with the Apple AirPods we found there’s a lot more on offer with the Pro model, most notably noise-cancellation and active EQ. But that still doesn’t mean many of us would be able to justify the price.

It's also worth bearing in mind that there are some great Sony WF-1000XM3 deals out there at the moment – right now, AirPods Pro deals are a little more rare, but you can still find them if you look hard enough. We've done the hard work for you, and you can check out the best prices for both models below:

The design of a pair of true wireless earbuds is often down to personal preference – do you want a bulky pair sticking out of your ears so everyone knows you have them in? Or do you like something unobtrusive and minimal?

Despite being slim and fairly minimal, the Apple AirPods Pro have a distinct look when you wear them. The stems of the Pro might be smaller than the original AirPods, but they’re still obviously Apple products.

Although the shorter stem might sound appealing, in practice it took some getting used to. That’s because there’s a ‘capacitive force sensor’ in the stem, which is a small ridge on each of the AirPods Pro that you can squeeze to activate noise-cancelling / Transparency mode, or skip and pause tracks. The shorter stem makes activating that ridge a little trickier, but we did find it became second nature within a few weeks.

In contrast, the Sony WF-1000XM3 wireless earbuds have a simple design and sit just outside of your ear rather than hanging down from them, like the AirPods Pro stems. This makes them look very unobtrusive, especially because their design is overall very simple with minimal, clean lines.

When it comes to comfort, the Apple AirPods Pro have had a big improvement over the original AirPods. They stay in place snugly and don’t bounce around, even when you’re jogging or charging up a flight of stairs.

This is largely due to the customizable fit with three differently-sized silicone tips on offer. Apple helps you find which is best for you thanks to a fit test, which you can run on the app once the earbuds are in place.

The only downside is if you sweat, the silicon tips can start to slide around a little. However, the important thing is they didn’t fall out. Which means if you’re someone who struggled with the fit of the original AirPods when running, these are a huge step forward and fit far more comfortably. However, during our testing, we found the Apple AirPods Pro to also be extremely light. This is a pro in that it makes them comfortable to wear, but could be dangerous if one were to fall out – we’re not sure we’d notice.

The Sony WF-1000XM3 wireless earbuds cleverly twist into place and, once there, stay secured by the structure of your ear. This design feels intuitive and means the experience of wearing them is snug and comfortable.

There’s a selection of seven different non-slip rubber and foam earbud covers supplied in the box, so you should experiment to find one that offers the best fit and comfort level.

Although neither of these earbuds are designed with sports in mind, a big plus of the AirPods Pro when it comes to design is that they’re IPX4 water-resistant. This means you can use them in the rain and if you’re sweating a lot and it won’t affect their performance.

Battery life is important for a good pair of true wireless earbuds. What’s the point of going wireless if they die after a few hours?

During our testing, we found the Sony WF-1000XM3 wireless earbuds last around 6 hours on one charge. If you forgo noise cancellation altogether, you can claim back another couple of hours, which combined with the charging case, gives you 24 hours in total.

They come with a smart rechargeable case, which doubles as a battery pack and has a quick charge mode. Plug-in for ten minutes and you’ll get another 90 minutes of juice. This is perfect if you need a quick boost before a flight – and the case charges over USB-C in about three hours.

In comparison, the AirPods Pro last 4.5 hours with noise-cancelling and around 5 without. The AirPods Pro’s charging case will give you over 24 hours of listening time when fully charged and also has a fast-charging mode.

So, when in terms of battery life, the Sony WF-1000XM3s just edge past the AirPod Pros, at least when it comes to the earbuds themselves – with the charging cases included though, both models will give you about 24 hours of listening time in total.

Both earbuds boast advanced noise-cancellation tech, which begs the question: which true wireless earbuds are the best when it comes to audio performance and noise-cancelling smarts?

Sony has a strong legacy of noise-cancelling tech. The Sony WF-1000XM3 headphones were among the first pairs of true wireless earbuds to use active noise-cancelling, thanks to a Sony QN1e HD noise-cancelling processor. That’s the same processor you’d find in the Sony WH-1000XM3 over-ear headphones, which have consistently been our pick for the best headphones you can buy since they launched in 2018.

Because they’re true wireless rather than over-ear, the Sony WF-1000XM3 headphones don’t quite match up to the WH-1000XM3s when it comes to noise-cancellation, but they’re not far off.

Although we found they didn’t drown out the sounds you hear on a plane (like take-off, announcements, etc), and therefore might not be the best bet for long-haul travel, where Sony’s noise-cancelling really scored was the everyday commute. Whether it was by train, tram or bus, the noise suppression is high. They’re also very good at eliminating nearby chatter, thanks to dual noise sensors in each bud.

We also found it virtually impossible to hold a conversation with Active Noise Cancelling engaged – which is a good thing, especially if you work in a busy office environment.

Although Sony may have a history of noise-cancelling devices, the AirPods Pro feature Apple’s latest noise-cancelling tech. We found that when active noise cancellation is on there’s a strong and noticeable effect.

Similarly, it won’t shut out all other sounds around you – if you’re in an office and there’s music playing, a small amount might still bleed through. But if you’re walking down the street, the AirPod Pros practically shut off all the noise of a motor bike, and any constant noise (like a fan or constant wind) is shut out very well, too. We also found they worked well on a train, making a huge difference when the mode was turned on and off.

The Sony WF-1000XM3 wireless buds have 6mm drivers that we found exuded clarity and rhythm. They serve up a wide, expansive soundstage, with believable spatial detail – which is great from such small buds.

When listening to podcasts, the mid-range is smooth. If you prefer to rock out, they roll with the best of them – guitars have edge, drums are tight and hard. Bass sounds good, but if you want a really pronounced thump you’re best off opting for over-ears anyway.

With the AirPods Pro, Apple is showing off its custom drivers, improved bass and an adaptive equalizer. What does this mean when it comes to sound quality? Well, when we tested the AirPods Pro with a range of tracks, we found vocals often sounded really rich and the bass, in particular, was more powerful than the AirPods 2.

This was present across acoustic, indie rock, electro, pop, and hip-hop – but equally across these genres, the separation between high mid and low was only average. There’s still a feeling that the sound is 'closed off', by which we mean it sounds as though the music is coming from inside your head. This isn't ideal and high-quality headphones tend to make it sound as if the sound is coming at you from all angles instead.

We also found that compared to on-ear headphones (or some top true wireless earbuds, like both the Cambridge Audio Melomania 1 and, yes, the Sony WF-1000XM3) it was harder to hear all the details in the music in the AirPods Pro.

Having said that, vocals in pop music came through clearly with rich and balanced mid-frequencies. But classical music sounded a little duller than it should.

One additional feature it’s worth mentioning here is that the AirPods Pro send exact volume levels to your iPhone so you can see if you’re listening to things too loudly. It’s a small but significant step in hearing health that could win some people over.

When we put some headphones head-to-head there’s a clear winner. But when it comes to choosing between the Apple AirPods Pro and Sony WF-1000XM3 wireless earbuds, you can’t really go wrong.

If we had to choose we’d say go with the Sony WF-1000XM3. These earbuds have broader appeal, better sound and are cheaper. The design will also appeal to most people, as will the extra battery life.

But it’s a very close call. The AirPods Pro have good noise-cancellation and fit well. It’s also a bonus that they’re water-resistant and have the added hearing health feature. It’s also worth bearing in mind that if you already own Apple products, including an iPhone, the AirPods Pro make a lot of sense.

Given there’s not much in it when it comes to pricing and battery life, the choice is also largely down to personal preference. If you like the AirPods aesthetic, you’re still getting a very premium pair of wireless earbuds.