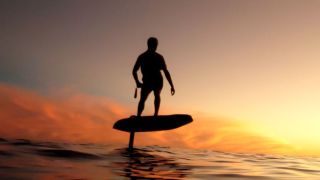 New phones. Urgh. New TVs. Whatever. A surfboard that flies? That’s more like it, CES! Far beyond the corporate keynotes, the meaningless slogans and the press events about nothing in particular are stacks of weird and wonderful gadgets. Here are just a few that will be shown-off at CES 2020 from January 7-10. Viva Las Vegas!

Why go to a gym when you can go ‘e-foiling’? Built on the concept of an foilboard/hydrofoil – kind of half surfboard, half electric propulsion jet ski with a propeller below the water – the Waydoo Flyer (US$6,495/UK£4,964/AUS$9,456) has a wireless Bluetooth hand-held controller for steering and toggling between five different speeds (up to 28mph maximum). With a slip-resistant, textured carbon fibre build, it’s got a 6,000W battery and keeps going for 75 minutes on one full battery charge.

Your cat is getting fat, it hates going to the vet, and you’re done with trying to collect its wee for analysis (cat owners will know what we mean). Cue Caremitou, a ‘connected’ litter box from France-based NovandSat SAS that weighs your cat, records how many times it visits the litter box, and even takes urine samples. Much of that is done with Bluetooth and a smartphone app, of course, but it’s the latter feature that’s Caremitou’s real trick.

It’s got two two litter boxes, one green, one blue. When you need to catch your cat’s wee for analysis by a vet, you just remove the green one. The blue one collects it, and analyses it, allowing you to keep track of your cat’s various illnesses. The app even links with your vet for follow-ups and results. Caremitou has already won a CES Innovation Award 2020.

Are light switches a thing of the past in your home since Philips Hue and Alexa? Engineering company Italy Innovazioni thinks it’s now time for the electric socket to get a makeover after about 120 years of looking terrible.

Debuting in the US for the first time at CES 2020, Hide is an AC outlet with a secure cover that makes plugs and sockets less of an eyesore. To that end each one is recessed into the wall slightly. However, there’s much more to Hide than aesthetics. At CES 2020, Hide will also be presenting its Home Automation & AI project, with working prototypes of smart covers with an embedded CCTV camera, fragrance diffuser, phone induction charger and, of course, Google Assistant and Alexa.

Kids who take up drumming are annoying, and unless they become as famous as Phil Collins then what’s the point? There is now a solution. Drum roll please…

Senstroke (US$175/UK£133/AUS$255) is a smartphone-enabled virtual drum kit that works by attaching sensors to a couple of drumsticks. Great for practising drummers, travelling drummers, and anyone within earshot of them, Senstroke enables a drummer to hit anything. Noise-wise, a cushion is best, but anything works … even real drums. As well as replicating the noise of drums, the app also records what you’re playing for use in any MIDI-compatible songwriting software.

There’s a new decade starting, and it’s got no room for selfie sticks. Cue selfie drones. The smallest and affordable aerial camera so far, Air Selfie AIR PIX (US$100/UK£76/AUS$146) comes fresh from winning a 2019 CE Week ‘Best in Show’ award. This tiny 52g device, which is smaller than an iPhone X, has turbo fan propellers to lift-off to 20m, enough for in-app control of selfies.

However, the flight time between charges is six minutes, so it’s best used sparingly. AirSelfie AIR PIX comes with a carrying case and a built-in 8GB MicroSD card.

Bass is all about feeling. The human brain finds rhythm most easily in low-frequency tones. So if bass music is close to your heart, why not bring it physically closer? That’s what the 310g, 26W BassMe does, a ‘personal’ subwoofer that’s just won a CES Innovation Award 2020 before the event has even begun.

Designed to overcome the limitations of bass through headphones, BassMe is a soft-touch contraption that sits on the chest and takes bass straight to the body. It connects to a headset via Bluetooth or audio jack, sits on the right shoulder and places at the centre of the chest at the sternum, essentially using the wearer’s ribcage as a soundboard for the six hours that it works between recharges.

Backward-compatible to any headset and any source of music, BassMe is designed for games consoles, VR gaming, smartphones and tablets, and home cinema. In fact, it’s already available in some cinemas in the south of France.