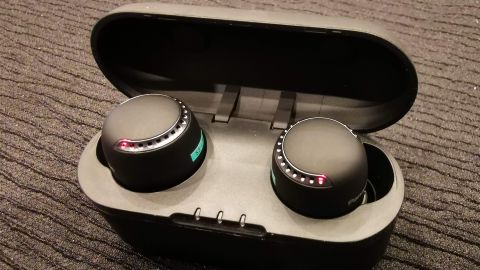 Behind closed doors at CES, we enjoyed some hands-on time with these new earbuds, which clearly seem designed to tempt buyers away from Sony’s well regarded WF-1000XM3. Could these be the True Wireless headphones to beat? We can’t wait to find out.

Announced during the Panasonic keynote at CES 2020, the Technics EAH-AZ70W is the brand's first true wireless headphones. The category has been bursting at the seams with new entries ever since Apple exploded onto the scene with the AirPods, but the Technics could offer something special: sound quality.

The brand has built its reputation on making some of the best-sounding audio equipment around and while the true wireless design format may pose a bit of a problem we were pretty impressed when we heard them in-person at the show.

While we'll reserve final judgment on sound quality until they're released later this year, the EAH-AZ70W feature a number of audiophile innovations that should be enough to steer some folks away from the Sony WF-1000XM3 and Apple AirPods Pro.

Here's what it's like to try on a pair.

It's worth noting that, as far as true wireless headphones go, they’re certainly good looking. Adopting a rounded design, they’re not what might be described as discreet, but they are reassuringly lightweight. The moulded earpieces offer a snug fit and provide a welcome level of sonic insulation.

While we wouldn’t advocate them for sports use, and doubt Technics will position them as such when they launch, they do claim to be splash proof, equivalent to IPX4. This is good enough to cope with a wet commute.

Available in either a black or silver finish, they come with a matching charging cradle. Technics branded, the latter is partially made from aluminium material and feels suitably premium.

Of course the real fun stuff is under the hood. The EAH-AZ70W employ a newly developed large diameter 10mm driver that uses a graphene-coated hard plastic diaphragm in conjunction with an airflow optimised acoustic control chamber, to present treble detail and enhance bass response. This proprietary Acoustic Control Chamber design, unique to Technics, is patent pending.

This chamber is also primarily responsible for their fulsome design. We compared them to Panasonic’s own-brand, also announced at CES, RZ-S500W True Wireless buds, which lack this chamber and are smaller as a result.

A high-performance MEMS mic is easily identified by a trio of tiny holes on each earbud. This isn’t not just for noise cancellation but helps with call quality. Beam-forming sharpens up voice transmission during phone calls, while suppressing ambient noise.

Other niceties include an ambient sound mode, to momentarily defeat playback volume to discover what’s going on around you, as well as noise cancelling control. A simple two second tap allows you to switch between Ambient Sound Mode, Noise Cancelling Mode or Off.

Bluetooth connectivity is robust, thanks to simultaneous left/right reception. To ensure uninterrupted reception, antenna and touch sensor have been integrated into the ear bud’s control section.

The Bluetooth iteration at work here is 5.1, and as a result battery life is par for the course, at around six hours (when the noise cancellation is turned on). However Technics engineers did confide that they were expecting to make improvements before the headphone launches, so watch this space.  The accompanying charging cradle provides two additional recharges.

Technics has chosen to use individual left/right Bluetooth signalling for each bud, rather than a traditional master/slave arrangement, which can be prone to dropouts. This left-right Independent signalling system doesn’t just maintain a stable connection, but helps with stereo sound balance.

Technics isn’t letting on which chipset it’s using, although it did confide that it’s not from Qualcomm.

To further enhance usability, the EAH-AZ70W can be customised and tweaked using a Technics Audio Connect App. Features include the ability to adjust noise cancelling and external sound capture levels, customize sound modes and battery level.

So far, so good. Of course the crucial missing ingredient is sound quality. Given that the EAH-AZ70W is still undergoing sonic tuning, and was presented to us in pre-production form, we’ll bide our time on this and not rush to judgement. Best to wait for their launch later this year to find out just how successful Technics has been in bringing its signature sound to the true wireless arena.