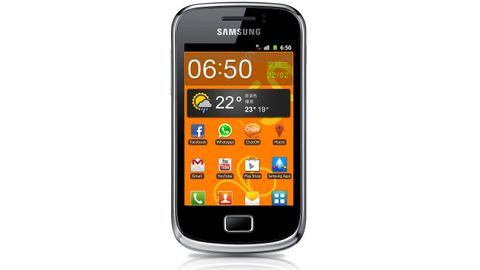 It's small, but is it mighty?

The Samsung Galaxy Mini 2 is an improvement on the original Galaxy Mini and while it doesn't do anything amazing, it's still a decent phone at its price range.

The Samsung Galaxy Mini 2 showed up at MWC 2012 in February and slides in at the lower end of Samsung's range, but it's not the firm's bargain basement offering.

Replacing the original Samsung Galaxy Mini, the Galaxy Mini 2 can be picked up for around £150 ($200) SIM-free and you can get it for free on contract starting at just £10.50 per month.

As we've mentioned, the Galaxy Mini 2 isn't Samsung's entry level handset - that accolade goes to the Galaxy Y – which means it lines up against the likes of the Nokia Lumia 610, HTC Desire C and Sony Xperia U.

Pick up the Galaxy Mini 2 and you're met with that undeniably plastic finish which graces Samsung's whole range of smartphones from the quad-core Galaxy S3 flagship, all the way down to the likes of the Galaxy Ace 2 and Galaxy Y.

Not that we expect flashy, aluminium frames at this price point and the Galaxy Mini 2 is a solid little handset which nestles snugly into the hand, with the rounded rear complementing the curvature of the palm.

While it's easy to get your mitt round the Samsung Galaxy Mini 2, keeping it there is slightly more of a challenge as the smooth plastic offers little in the way of grip, and we came close on several occasions to dropping the handset during our review period.

The Galaxy Mini 2 may only weight 105g, but it has a solid build and we didn't experience any flexing of the chassis when we put it under pressure, so even if you were to let it slip out of your sweaty grasp, we reckon this little Samsung could take a few knocks.

Up top there's a 3.5mm headphone jack and the power/lock key is found at the top of the right side of the Galaxy Mini 2 – the position of choice for Samsung on all its smartphones these days.

On the left you'll find the volume rocker switch, which is easy to hit thanks to the petit 109.4 x 58.6 x 11.6 mm frame of the Samsung Galaxy Mini 2, allowing you to manipulate every last millimetre of the handset, even when held in one hand.

Below the volume switch there's also a microSD card slot, covered by a small but easy to open plastic door – allowing you to expand on the average 4GB of internal storage and thanks to the handy side-access, you can swap between cards without having to remove the battery or even the rear cover.

The bottom of the Samsung Galaxy Mini 2 sports a centralised microUSB port and a pin hole for the microphone, while round the back there's a 3.15MP camera and a small, slightly raised speaker grill next to it.

There's no LED flash for snapping in low-light, nor is there a front facing camera for video calls and vanity checks.

Below the display there's the famous physical Samsung Galaxy home button, flanked by touch-sensitive menu and back keys – all of which we found to be suitably responsive to our various pokes and prods.

Switch the Galaxy Mini 2 on and the screen lights up to provide a decently bright and clear display, with text easy to read and colours relatively well represented – more than acceptable for a smartphone in this lower price bracket.

Flip the handset over and peel off the colourful yellow cover (black is also available), which is well connected to the rest of the frame but still easy to take off, and you'll notice that on the other side of it there's a black sticker which is actually the NFC pad.

It's good to see NFC making it ways into the cheaper handsets, with BlackBerry having led the way at the lower end of the market with this latest technology.

There's a removable 1,300mAh battery, which isn't huge, but with the small screen and 800MHz single-core processor on the Galaxy Mini 2, this isn't too much of an issue.

Pop the battery out and you'll then have access to the full-sized SIM card slot, no sign of micro- or nano-SIM support here.

The Samsung Galaxy Mini 2 is a good looking, budget handset with a strong build quality and manageable size – and the bright colour option for the rear cover will probably resonate with fashion-conscious teens.