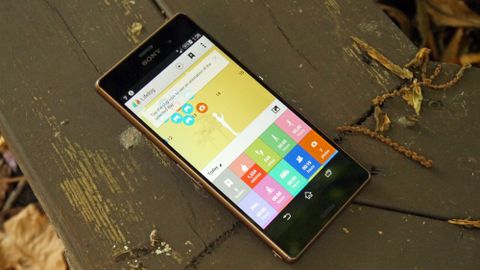 A much better phone - but needs some tweaking

An improvement over the Z2, but not a huge one. It does pack a great, bright screen but needs to be better packaged to fight the best on the market.

The Sony Xperia Z3 isn't a phone that you'd have thought would make a lot of sense. After all, the Xperia Z2 was a nifty little handset and yet it's now been replaced barely six months later.

The new phone, from the outside at least, doesn't seem to add much more into the mix, merely improving things a little more and tweaking elements that were already pretty good. So has Sony really done enough?

The Xperia Z3, which lands alongside a new tablet and mini phone to complete the family (the Xperia Z3 Tablet Compact and the Xperia Z3 Compact), is a really good phone that does it all, on paper at least.

Sony told me that the reason these flagships are coming thick and fast is simply because it wants to start making waves in the high-end smartphone market, and the way to do that is always offer the best innovation.

That's perhaps true, and perhaps customers won't get too confused by seeing a new phone on the shelves and advertised all the time, but there's no doubt it kills the lustre that might have been built by users having to wait a year to get the best of Sony in a smartphone.

It needs to work as well - while Sony does OK in some markets (it's still got a lot of fans in the UK, for example) the profits are dipping in the smartphone business, and something needs to be done to arrest the slide.

So is the Xperia Z3 that phone? It does come in attractive colours (white, black, copper gold and 'silver green') and has a shrunken frame, improved camera and that all important Sony PS4 Remote Play compatibility.

Those things alone would be good enough for most, and the IP68 rating (which might not really change the way 99% of people use their phone) is at least a good 'peace of mind' marketing tool.

Sony has now introduced the sequel to the Xperia Z3 as well, the Xperia Z3+. Sony has skipped the Xperia Z4 name for this iteration and once again it's fustratingly only an incremental update.

A new processor set up, a slightly different body shape, new colours and a slightly trimmed battery pack make up the new changes. We've had a little hands-on time with the new phone but we're currently unsure whether it is enough to blow the Xperia Z3 out of the water.

We'll know better when we manage to get our full review under way but for now check out our hands-on review with it here. But for now, here's the Xperia Z3.

The design of the Sony Xperia Z3 is something that surprised me from the word go - I didn't expect to be as impressed as I am.

But the slightly shrunken nature of the chassis is very nice indeed (especially the millimetre thickness shaved off the phone), and something that I really want to laud the brand for.

The ergonomics still don't quite impress - this is, after all, a slab of light-feeling glass encased in a metal band, and the flat edges make it slightly harder to hold and grip (and easier to drop, as I did a couple of times).

But in terms of aesthetics, it somehow impresses me every time I look at it. Yes, the bezels above and below the display aren't anything to get excited about (they're just too large to look nice, but presumably pack some important components) but the overall package looks premium.

The copper colour I had on test is also something I didn't expect to like - after all, this is really a brown phone - but it again seems to exude a quality that belies the slightly lower price tag.

On top of that, the edges have been rounded to make holding the phone an altogether more pleasant experience. I wasn't expecting to feel much difference between this and the Z2 given the similarity in dimensions, so this was a nice surprise.

The rest of the phone is largely as expected: the Omnibalance key at the side is pretty easy to strike, and although the volume key is positioned just below and theoretically too close, the larger size of the phone makes it easy enough to differentiate in the hand.

I do hate that Sony keeps putting a dock connector on the left-hand side of the device - this confuses in the hand, feeling a bit like the volume key, and I can't see that it's something many people would actually use given the smaller sales of such aftermarket accessories.

Then there are the port covers. We clearly need these to make sure the phone is fully waterproof of course, but the problem here is that they ever so slightly stick out, even when pressed in as hard as possible.

The main culprit is the cover for the microSD and SIM card (which is now a nano option, showing Sony is starting to fall in line with the rest of the industry) which just protrudes slightly and therefore ruins the sleek, premium air the Sony Xperia Z3 has.

The other change to the design is the nylon covers in the corners of the phone - apparently these are cleverly added to stop the phone looking so damaged. According to Sony, most phones land on these corners when dropped, so putting the covers on helps stop the tarnished metal.

Except, well, it doesn't. The corners on my review device are fine, but even before dropping the phone later in the test, there were already two small nicks in the metal band in just over a week.

This is the same thing we saw with the iPhone 5, and anyone that's owned one of those and kept it out of a case will see the scratched up monstrosities that some people are walking around with.

I don't think the Xperia Z3 will suffer to quite that degree, but it's interesting to see the effect happening so quickly.

The front facing speakers are worth a mention here too. Not only do they help to justify the oversized bezels, they also provide some pretty good and rich sound.

While not in the same league as the HTC One M8, the smaller and more discreet design will appeal to those that want good quality audio without the compromise in aesthetics.

And Sony, of course, continues with the dedicated camera button. I mention it last as its presence is always something to be celebrated: an easier way to fire up one of the most-used applications on the phone and a more stable method of snapping away.

Thank you Sony, long may the camera key continue.

Some of you may be wondering if it's now worth waiting for the Xperia Z4 and if the rumours turn out to be true, it will be.

According to various sources the design will be of the same language as previous Sony Xperia products but this time around it's going to have much thinner top and bottom bezels with the iconic square corners rounded off.

None of the rumours are anywhere near confirmed yet but it's worth bearing in mind the Xperia Z4 may be a drastically different looking smartphone when considering what Sony offering you want to pick.