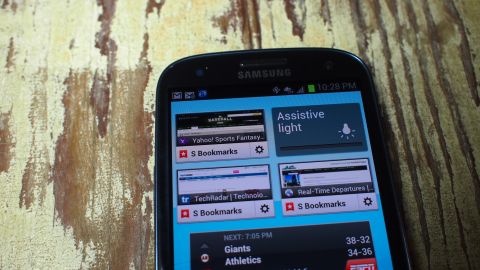 How does AT&T's Samsung Galaxy S3 hold up?

If you've been waiting feverishly for the new Samsung Galaxy S3, you will not be disappointed. It's fast, it's sleek and it packs the latest technology that will get your pulse racing.

This is shaping up to be the year of the awesome cell phone (that isn't produced by Apple). The awesomeness began with the release of the Nokia Lumia 900 early in the year. After that, around CTIA 2012 in New Orleans, HTC dropped their Evo 4G LTE, a Sprint phone that dazzled us with its incredible camera, relatively fast speed, nifty kickstand and amazing screen.

Not to mention the various HTC One flavors of mobile phones. Not to be outdone, Samsung released the European version of the Samsung Galaxy SIII around the same time...and well...our buddies across the pond came to the conclusion that it may be the best mobile phone ever.

Microsoft even jumped into the fray by announcing that Windows Phone 8 handsets will be available this fall.

Team America for the win!

Of course, the mobile phone marketplace being what it is -- confusing as all get out -- the Samsung Galaxy SIII that our European brothers and sisters got their warm-beer-loving hands on turned out to be decidedly different than the device that eventually made it to the States.

While many of the specs remain the same: 8-megapixel camera, 4.8-inch Super AMOLED HD screen, excellent battery life, and brushed poly-carbonate housing (that comes in "Marble White" and "Pebble Blue"), the handset that AT&T, T-Mobile, Sprint, Verizon and US Cellular will be releasing in the States boasts a few rather significant differences. Some might even call them upgrades.

Much has been written about the fact that the device that ultimately showed up in the States rocks a dual-core Qualcomm Snapdragon S4 processor and twice as much RAM as the European model: coming in at 2GB. That said, the question remains, "How does this model compare to its brother across the Pond?" In a nutshell, not that much.

While the Snapdragon S4 processor that's in the American version isn't as robust as the quad-core processor in the European model, the Samsung Galaxy SIII, for all intents and purposes, is a fast phone regardless of which one you play with. And aside from running Speedtest, most users will be pressed to notice the difference.

Additionally, the American cell phone marketplace differs from that of Europe in that it's extremely carrier specific. Such that the Samsung Galaxy SIII experience will differ slightly from carrier to carrier.

How does AT&T do?

Each U.S. carrier likes to pack their phones with their own software. To that end, AT&T is slightly better than the rest of the pack.

In addition to the standard apps that are present on all versions of the Samsung Galaxy S3, the AT&T version also boasts AT&T Navigator and myAT&T. While some may see this as a scant offering, many, ourselves included, welcome the fact that, unlike Verizon, AT&T is loathe to cram the handset full of their own proprietary apps that, well, are already handled by Android Ice Cream Sandwich.

We used AT&T Navigator in all three of our test cities and it worked perfectly well. But so did the Maps apps that ships with every Ice Cream Sandwich-based cell phone.

While Wi-Fi is becoming more ubiquitous each day, the fact remains that there will be times when you need to use your cell phone as a mobile hotspot. Gone are the days of AT&T offering its customers unlimited data. If that's more your thing then you'll do well to head over to Verizon, Sprint, or T-Mobile. That said, we tethered our HP Envy 14 Spectre laptop as well as our new iPad to the Samsung Galaxy SIII (AT&T) mobile phone.

Setting up this relationship was super-simple, and once we did it, the devices would automatically talk to each other. As long as the portable Wi-Fi hotspot feature was enabled on the phone.

And this is where the Samsung Galaxy SIII (AT&T) falls short of the Verizon, Sprint, and T-Mobile flavors.

While you're able to connect up to 10 devices to the Samsung Galaxy S3 (AT&T) simultaneously, you'll constantly be thinking about what may happen if you bump up against and then surpass your data limit. Awful things.

Criticisms aside, as a 4G phone, we were actually able to achieve faster download speeds via the Wi-Fi hotspot with the Samsung Galaxy SIII (AT&T) mobile phone than we were using an HTC Radar 4G (T-Mobile) phone in the same three test areas: San Francisco, Oakland, and Kona. Go figure.

Current AT&T customers will be hard pressed to not love the Samsung Galaxy S3 (AT&T). With its amazing 4.8-inch Super AMOLED HD screen, Snapdragon S4 processor, 2GB of RAM, and excellent battery life (especially for an Android phone), the Samsung Galaxy SIII (AT&T) may be the go to phone for AT&T subscribers to cop right now.

While the Nokia Lumia 900 is super-sexy, at around six months old, it's already starting to look a little long in the tooth, and well, who really wants to plunk down $100 for a phone who's obsolescence was just announced by Microsoft at their recent Windows Phone Summit in San Francisco?