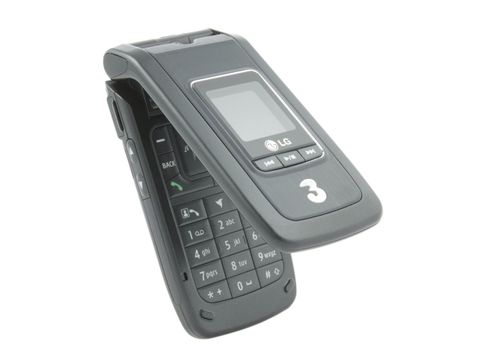 A 3G handset that's slim enough to pass for a 2G model has got to be worth a look, and the U880 manages it without sacrificing too many photo or phone features. Just don't expect next-generation image quality, too.

Those of you who've tried a 3G phone in the past can be forgiven for rushing straight back to your old 2.5G handset. Many 3G handsets are heavy, bulky and raced through batteries in next to no time.

But technology moves on and, while the latest phones are no match for super-slim clamshells like the ever-popular Motorola V3, they're no longer a danger to pets and small children if you happen to drop them.

The LG U880 is the slimmest, lightest 3G phone to hit the market so far, weighing a modest 98g and taking up just 9.6cm of space. Its silver plastic case (black and pink are also available) is a mere 19mm wide at its thickest, and flips open to reveal a surprisingly spacious keypad and 2-inch display.

The screen can display 262,000 colours - giving a true photo-quality display - and it is (just) sharp and responsive enough to keep framing and playback from being a chore. It's not at its best in low light, however, and there's no video light or flash built in.

The menu system works on a combination of icons and text menus, and is both simple and quick to navigate. Three soft buttons beneath the display change function depending on which menu you're in and everything is straightforward, if not as intuitive as a Nokia interface.

The whole keypad is fairly flush to the phone, so you'll occasionally hit an adjacent button by mistake, but at least they're all large enough for fully-grown fingers.

The U880's camera is located in the hinge itself, swivelling forward for normal photography or back for self-portraits and video calls. It's only 1.3 megapixels in resolution, which is on the small side these days, but has some useful features.

There's a huge choice of image sizes, from tiny snaps meant for the address book or front screen, up to full resolution 1,200x960-pixels. There are also three quality levels - a feature that's a little redundant considering even the largest images are under 250Kb.

Apart from the basics, you can tweak exposure, select white balance settings, add effects and frames, or enter a Night mode that boosts low-light colour reproduction slightly. The burst mode only works at VGA or lower resolution, but as its maximum speed is a lackadaisical 1fps, you're not missing much if you stick to megapixel snaps.

The U880 struggles to disguise its cameraphone heritage. Colours (especially skin tones) are smooth, and the LG has a wider dynamic range than most mobiles. But detail is predictably weak and noise depressingly noticeable in dim light. Videos, captured in the mobile 3GP format, are small and murky.

Audio call quality is good and the U880 has the latest 3G bells and whistles, from video calling and downloads to Bluetooth transfer, a media player (including MP3s) and a TransFlash memory slot.

If you want to trade up to 3G but aren't prepared to lug a huge handset around, the U880 is great. It won't threaten your real camera, but has enough features to earn a place on your shopping list. Mark Harris