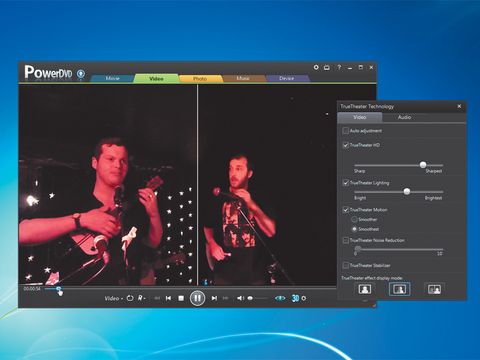 TrueTheater can result in impressive improvements to your home videos

Ever since the first 'multimedia PCs' with their fancy new CD-ROM drives appeared in the early 1990s, we've been using our computers to enjoy media. As a result, free media players like VLC Player and Windows Media Player that let us listen to music and watch films have become very popular.

Cyberlink's latest version of its PowerDVD software faces the same questions as every previous release: what does it offer over free media software, and does it bring anything new to make it worth upgrading from an earlier version?

In answer to the first question, there are several features that improve media playback. Support for Blu-ray is included (3D and 2D), as is DVD upscaling. This improves the look of SD content on HD TVs, and works well. It also supports DTS-HD Master Audio and Dolby TrueHD lossless 7.1 surround sound, which are essential if you have a decent home cinema setup.

Cyberlink has recognised that film and music fans are social creatures, keen to share opinions and reviews of their favourite artists and auteurs. PowerDVD integrates some handy social networking features, which let you share your reviews with other users from within the main program.

New releases on DVD, Blu-ray and at the cinema are attractively displayed in the main screen, and clicking them brings up information, reviews and trailers. Rather than opening up a web browser and sending the user to the internet to find information, PowerDVD 11 delivers everything within its own interface, giving a strong impression that this is a program tailor-made for film fans.

Browsing your media through PowerDVD 11 is similar to using Windows Media Player. Folders, external devices and other DLNA computers and drives connected to your network are shown on the left, while thumbnails of the media are displayed in the main window.

Where PowerDVD differs from Media Player is the 'Online media' section. This lets you view media on Facebook and Flickr as if it was stored locally on your PC. This is handy if you want one program to view and play all your media.

Another feature unique to the PowerDVD series is Cyberlink's TrueTheatre technology, which uses the graphics card and processor to improve media playback. With standard definition content, this involves upscaling the resolution so it looks better on HD displays.

While the increase in quality for DVDs is impressive, it really shows in home videos. TrueTheatre smooths out playback and tweaks colours and lighting on the fly. It can also create surround sound effects from stereo sources.

Cyberlink has added various features since version 10, almost all to do with 3D playback. These include support for recorded 3D TV and photos, and 3D upscaling for photos on Facebook and Flickr.

TrueTheatre 3D photo upscaling takes standard two-dimensional photos and transforms them into 3D. It seems to do this by assuming that the foreground details are in focus, then pushing background details back. The results are hit and miss, with some photos (usually of wide landscapes) looking good, but just as many looking awful. The same is true for movie upscaling, although both can be impressive.

The best new feature is the PowerDVD Remote app, included free with the Ultra and Deluxe versions, lets you control playback on your PC using your smartphone. Most of these new features will only really be of interest to people who want to watch 3D content. If you don't and are happy with a previous version of PowerDVD, the upgrade isn't really worth it.

Cyberlink has muddied the waters somewhat by releasing three versions of PowerDVD: Standard (£40), Deluxe (£55) and the version we tested, Ultra (£80). The Standard version doesn't contain a number of the better features included in the other versions, so we wouldn't recommend it.

If you rely on free software to play your media and are keen to share your opinions with other fans, then this is a good product to help get the most out of high and standard definition content.