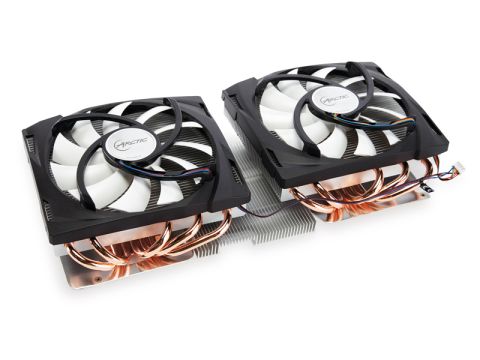 AMD's HD6990 might be a frame rate-crunching monster of a card, but its dual cores are kept cool by the same old wee AMD Red reference design fan. That may be fine for a single card, but is really pushed trying to keep two serious graphics cores cool – especially when the card is being ridden hard by the polygon cowboys.

Although it may sound like a vacuum cleaner, that reference fan's cooling capabilities don't match up to the decibels. And you can stop sniggering at the back too, Nvidia's reference cooling fans are just as bad. Even though it's right at the top of the food chain, and out of a great many people's financial reach, the HD6990 has desperately been in need of some love from third party cooling ever since it was released.

Enter the ARCTIC with its Accelero Twin Turbo 6990 cooler. As you might have guessed from the name, it uses two 120mm fans and a 10 heat pipe design heatsink to keep the AMD beast cooler and quieter than the reference design.

When you first see the size of the Twin Turbo 6990 and its dual 120mm fans (adding another 820g to the weight of the PCB) you might have an inkling about what it can do, but nothing can quite prepare you for the difference it makes.

When the 6990 is under 100 per cent load it goes from a screaming banshee you can hear across the other side of the room to something that's barely audible, even when you're standing next to it. It really takes some listening to believe it.

To test the cooler, we ran the card at the stock 830MHz core speed and the overclocked 880MHz core speed available via the card's BIOS switch to really push it under load. As you can see from the test results, the fans occasionally peaked at 1,102rpm under full load but were generally running in the region of 828-834rpm.

In a stroke, that accounts for how quiet the cooler is in general gaming use. The fans not only quieten everything down, they also help transform the thermal dynamics of the card.

With the standard cooling the card gets to a very toasty 88ºC at 880MHz under full load and the single reference fan struggles to cope – hence the noise. The Accelero Twin Turbo drops this by some 16ºC though, which is quite some feat.

The result is that you still get a frame-crunching monster, but one that's now so quiet in operation that pushing the card to its maximum no longer needs the addition of ear plugs.

When it comes to ripping apart £500 plus graphics card to replace the cooler, you want the replacement cooler to come with a decent set of instructions to help calm your nerves if nothing else, and here ARCTIC has excelled. The instruction sheet supplied with the Accelero Twin Turbo is superb. At first glance it may look too simple, but everything you need to know is clearly explained with the aid of illustrations – both for the dismantling of the original cooler and the fitting of the new one.

Yes, it might be expensive, but this is also amazingly good at what it does, changing a screaming banshee of a graphics card at full load into something barely audible.