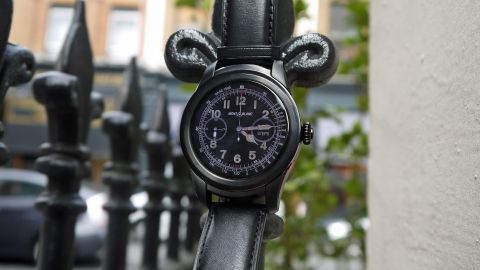 If you think the Mont Blanc Summit is too expensive, you’re not the type of person the luxury Swiss watchmaker is trying to target with its first smartwatch.

Let us be clear: the Mont Blanc Summit is expensive. In fact, it’s really expensive when you consider that, functionality-wise at least, it does no more than rival Android Wear watches a third of the price.

Smartwatches haven’t exactly set the world alight, but Mont Blanc isn’t the only watchmaker exploring the sector, even though it’s currently still dominated by technology firms.

The hope is that the Mont Blanc name will be enough to encourage those shopping for a smartwatch to up their spend for a brand name synonymous with watch-making rather than consumer electronics. We’re not sure there’s too much of a market for this though.

Just how much will this luxury smartwatch set you back? The Mont Blanc Summit price starts at £765 ($890, around AU$1,290) which in a world of Android Wear watches from the likes of LG, Fossil and Huawei is at least two times the going rate.

Depending on the combination of body and strap though, the price goes up, all the way to £915 ($1,020, around AU$1,540) for the titanium case with alligator leather strap.

It terms of design the Mont Blanc Summit is pleasing to the eye. It reminds us of the LG Watch Urbane, with its bold metal chassis providing a premium finish.

If anything though, it's too similar to the Watch Urbane – a smartwatch that's a quarter of the price – and considering the Summit is made by luxury Swiss firm Mont Blanc that's a little disappointing.

It's stylish and looks good on the wrist, but it doesn't quite match the price tag when you compare it to its lower-priced opposition. The IP68 rating means it's sweat-, rain- and splash-proof, but you'll want to avoid leaving it on while you shower or go swimming.

Something that does help it stand out, though, is its distinctive crown, although while it’s a nice addition at the three o'clock position, it too is a little lackluster.

The Mont Blanc Summit runs Android Wear 2.1, Google's newest version of its wearable interface, and it's an OS that favors a rotating element – be that a crown or a bezel – for its navigation.

The issue is that the Summit's crown doesn't rotate – it's just a button. Press it once to enter the app menu/return to the clock face, and long-press to launch Google Assistant.

Sure it works, but Mont Blanc is a premium watchmaker with a long history, and for it not to utilize a staple smartwatch feature here is surprising.

You do get a variety of customization options (if you're willing to pay extra), with four case materials and seven straps to choose from.

The Summit sits comfortably on the wrist, and the heart rate monitor on its rear doesn't dig into the skin, which reduces any irritation. The 46mm diameter, 12.5mm-thick case will swamp smaller wrists – and there’s no smaller option – but it’s no different in size to standard analogue watches.

It's also not too heavy – it’s actually lighter than traditional timepieces, and you might forget you're even wearing it after a while.

While the heart rate monitor is a nice addition, another negative mark against the Summit is its lack of NFC. That means you won't be able to use Android Pay for contactless payments – arguably one of the most useful features of any smartwatch.

There's also no GPS, which means you can't leave your phone at home if you want to go out for a run and track your movements. Again, considering the price of the Mont Blanc Summit it's surprising it hasn't arrived with a full feature set.

The large 1.39-inch, 400 x 400 display makes everything easier to read, and the extra room means the interface can be manipulated more efficiently. It's larger than the screen on the Huawei Watch 2, for example, which felt cramped.

The display is protected by toughened sapphire glass, which should keep scratches and scuffs at bay. We were generally pretty careful with our review unit, but it did manage to survive a few bumps without any damage.

Next Page Battery life and what’s it like to use