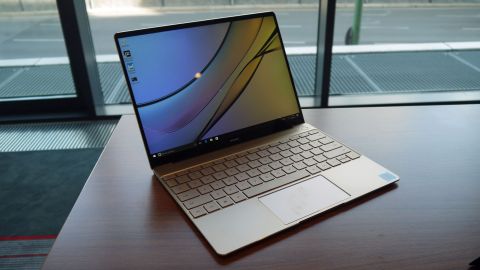 The Huawei MateBook X is the first attempt by the Chinese firm at making a laptop, but it has actually succeeded impressively well offering everything you'd expect from a portable computing option in 2017.

Update: Huawei has just announced that pre-orders for the new line of MateBooks will be available starting tomorrow, June 30 right here.

Huawei is a Chinese manufacturer best known for its selection of high-end phones such as the Huawei P10 or Mate 9, but now the company is expanding into laptops too.

The MateBook X is the company's first attempt at making a laptop and it's positioned as a competitor to the Apple MacBook.

It features a high-quality and slim-line design, top-of-the-range internal specs and Huawei wants this to be competition for some of the best ultrabooks on the market.

As it's the company's first attempt, you may be nervous to buy a laptop from Huawei, but there are a lot of impressive features here, and there's a chance you may be buying this as your next laptop.

Here is the Huawei MateBook X configuration sent to TechRadar for review:

Huawei launched the MateBook X in Berlin towards the end of May 2017, but the official details of pricing and the launch date have so far been limited.

You’ll be spending quite a bit extra here to be able to get the i7 versions of the laptop though, so you may end up spending a lot more than that to buy the version of the MateBook X you want. We expect to see official pricing and release date info very soon.

As soon as you pick up the Huawei MateBook X, you'll realize this is a high-end piece of kit. It's slim, sports an attractive design and, most importantly, light.

One of the best elements we found from the MateBook X is its portability. You'll need to buy a case to haul this laptop around as it does sometimes feel fragile, but it only weighs 1.05KG.

The keyboard is backlit and has tactile keys, which makes typing on the MateBook X not only comfortable but actually a joy to write with. There's an easy to use trackpad just below the keyboard too, but apart from that physical features are limited and it makes for an attractive design.

To keep the laptop slim, Huawei has opted for two input ports here and it does feel a little limited. There's a USB-C on the left hand edge for charging while the one on the right is intended for optical input.

The adapter that comes in the box will be able to do the rest for you, but that is also limited as there's no ethernet option on the MateBook X. If you're planning to only connect to Wi-Fi, you won't see that as a problem but it may be a big issue for some.

One annoying quirk we did find was the way you open up the MateBook X: we regularly found ourselves trying to open it the wrong way as there's no clear distinction on the way you open it up.

Color options for the Huawei MateBook X are black, gold and rose gold but it seems the former option won't be available in the US or UK.

The screen on the MateBook X is a marvel though. It's a 13-inch display in a 12-inch body, and Huawei has managed to achieve this by including a slightly different aspect ratio of 3:2.

Compared to most other laptops this makes the screen feel unique, but it isn't so strange that it's uncomfortable to use.

The bezels are slim and it feels like no space is wasted, while the screen itself is QHD and bright offering fantastic picture quality.

If you're looking for a comfortable experience for watching video, the display on the MateBook X will be perfect for you.