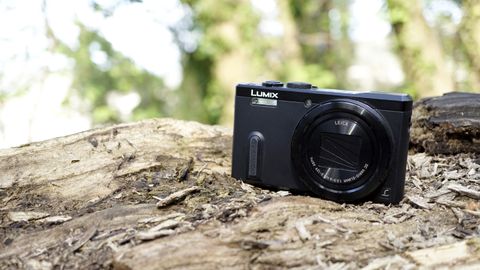 The TZ60 is a versatile camera that's ideal for taking on trips either for business or pleasure, and its huge zoom and focal range will appeal to both beginners and more experienced photographers.

The top new features are the EVF (electronic viewfinder), a 30x optical zoom lens that replaces the already impressive 20X optical zoom of the TZ40/ZS30, a control ring around the lens, and the ability to shoot raw files. Image stabilization and AF speeds have also been improved.

As with the TZ40, Panasonic has used a Leica DC VARIO-ELMAR optic, but the focal length range is 4.3-129mm, giving a 35mm equivalent range of 24-720mm. Meanwhile the maximum aperture range is f/3.3-8. The new lens is constructed from 12 optics in nine groups, which can be operated as six groups when needed.

Panasonic has used essentially the same EVF in the TZ60 as it has in the Panasonic LF1. This is a 0.2-inch, 200,000-dot device, but the company has added a second lens to reduce chromatic aberration and improve overall quality. Its addition to the TZ-series camera will be especially welcomed by those traveling to bright, sunny locations where an LCD image is traditionally hard to see.

The TZ60 has a five-axis Optical Image Stabilisation (OIS) system to compensate for five directions of movement or rotation. This system uses balls rather than rods to move the IOS element and in theory gives far steadier performance. Panasonic claims the hand-holdable shutter speed range is extended by 3EV. There's also a novel Level Shot function for video that automatically detects when the horizon will not be level and corrects accordingly.

Like the TZ40, the TZ60 features a 1/2.3-inch 18-million-pixel sensor. Despite it retaining the same pixel count, the TZ60 has a new sensor and Panasonic claims it has worked hard to improve the overall image quality, especially at the higher end of the sensitivity scale.

As travel compact cameras, the TZ series need to be adaptable, enabling the photographer to shoot great landscapes and portraits plus everything in between. To this end, the TZ60 has an extensive collection of scene modes for use with specific subjects as well as Intelligent Auto, manual and semi-automatic settings such as aperture and shutter priority. These are accessed via the mode dial on the top of the camera. There's also space for two custom settings if you use certain set-ups regularly.

This means there are options for experienced and novice photographers and those who want the camera to do more of the work.

The TZ60 also retains the connectivity options of the TZ40, featuring both Wi-Fi and NFC. This means you can use a smartphone to remotely operate the camera and view the images you've shot. It's also possible to transfer images to a phone for sharing - something that especially appeals to travelers.

One disappointment with the TZ60's feature list is that the touchscreen of the TZ40 has been omitted. This is most likely to keep costs down, but it seems a shame as it can be very useful and speed up AF point selection and the like. The 3-inch 920,000-dot LCD is also fixed rather than tilting or articulated, so it doesn't offer any help when composing selfies, but it is possible to compose images on a smartphone screen when using Panasonic's app with the camera, connected via Wi-Fi.

It's also worth noting that the EVF and LCD screen both show approximately 100% of the scene, so there shouldn't be any surprises around the edges of images after you've captured them.

As an upgrade to the TZ40, the TZ60 has much to offer. While there are several big new features, there are also some smaller, more refined changes and additions that will give the TZ60 broad appeal. The move to allow raw file recording will be particularly attractive to enthusiast photographers looking for a small, versatile camera that gives them plenty of control. Raw files offer the advantage of bespoke control over noise on an image-by-image basis.