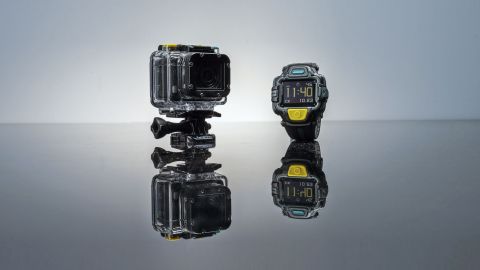 The facility to broadcast live footage is a novel feature in action cams, and something that will appeal to many. Where this camera really excels is in its ability to make the action camera format truly accessible to the mass market. Both the camera and the app are easy to use for novices, and the monthly contract option will make the 4GEE attractive to those who can't afford to buy an decent action camera outright.

Throwing loads of extras into the bundle might make it feel like you're getting value for money, but the live view watch leaves much to be desired. The quality of the stream is overly pixelated and slow, which is a shame when so much thought has been put into the rest of the product. Video quality is variable from the camera, and while footage shot in urban environments looks good, footage of fields or other expanses of similar colour lack definition.

The 4GEE Action Cam brings an exciting new angle to the wearable camera market with the ability to broadcast live via the 4G network and the skeegle app. The camera, live view watch and app make up a nice package, and initial setup, connection and use are straightforward, making it a good option for the non-tech savvy.

Its size and weight does make it one of the larger action cameras on the market, but the use of the GoPro-style mount and the ability to change the position of the mount gives it an edge over the likes of the Veho K2 and Toshiba Camileo X-sports in terms of flexibility – the camera can be attached to almost anything. Video quality ranges from good to mediocre, and while the resolution and frame rate options are rather limited, they'll suit the needs of most users.

At the £299 upfront price you'd expect something to rival the features and quality of the TomTom Bandit or GoPro Hero4, but the 4GEE comes nowhere close. On contract at £10 a month the 4GEE becomes more appealing, packaging the action camera experience in a fun kit, albeit one that will appeal to families rather than to serious extreme sports enthusiasts.