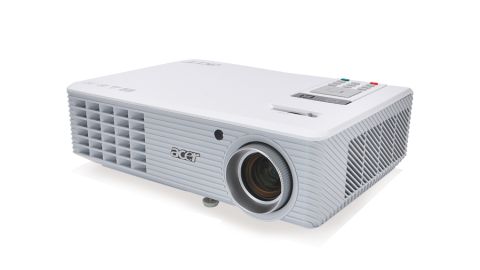 When it comes to stereoscopic 3D, we've got a bit of a soft spot for the Acer H5360. It was our first taste of a 3D product that actually had us tempted to take the plunge.

We reckon the greater viewing distance a projector offers compared to a monitor makes it easier for your eyes to cope with the contortions demanded by the fake depth of view. Not only does that make for more comfortable viewing, it also means the 3D illusion is more convincing.

So, just how much do you have to pay for the tantalising prospect of life-sized monsters and machines jumping out of your living room wall? Depending on how you look at it, the answer is nothing.

That's because at £419, the Acer H5360 is no more expensive than Acer's 2D 720p DLP model. So you wouldn't be paying extra for the 120Hz capabilities. In standard 2D mode, it's easily as crisp and accurate as any similar projector we've seen.

The rich, vibrant colour rendering betrays little evidence of compression or loss of detail, too. Likewise we're impressed by the black levels. They're as deep as you would expect from a projector with a claimed contrast ratio of 3,200 to one.

As for brightness, there's more good news. Rated at 2,500 lumens, the H5360 has plenty of punch for running during the day. If anything, it's a little too bright for movies, even with the lamp in eco mode. That said, fan noise is fairly suppressed, making it a decent enough choice for home cinema duties.

It even has a handy feature allowing you to adjust the colour balance when projecting on off-white walls. And it actually works: we found it cleaned up the whites very nicely on a yellow wall, for example.

But where this projector really delivers is games and, even better, 3D games. The drop down in detail compared to 1080p is much less critical in-game than watching some slow-moving, exquisitely shot room-with-a-view drama. The 120Hz capability makes for ultra fluid visuals in standard mode. And you've got the option of firing things up in 3D, too, if that's your bag.