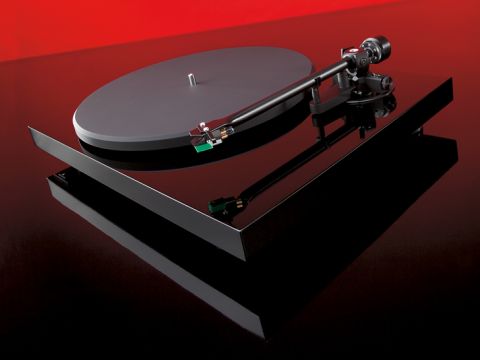 The TT50 is an attractive and entertaining turntable

The Cambridge TT50 is a good looking and highly enjoyable turntable that, unfortunately, is scuppered by the lack of an arm lead in the box and the quality of the competition at this price point.

Back in the late 1980s, the demise of vinyl was being widely predicted by both the specialist and mainstream press. Since then, however, things have actually improved for hi-fi’s most enduring format. And now even Cambridge Audio – a brand that has never graced a turntable fascia throughout its 40-year history – has launched a turntable.

The TT50 is actually built for Cambridge by budget turntable specialist Pro-Ject and bears more than a passing resemblance to the firm’s Expression model. There are a few significant differences, though, such as a platter that’s covered with what Cambridge describes as elastomer coated acrylic – a combination that’s claimed to be impedance-matched to vinyl in acoustic terms, with extremely low resonance. We’ve heard other brands make the same claim for plain acrylic, but this certainly feels substantial in hardness terms, at least.

The turntable has an alloy tonearm with integral headshell and magnetic anti-skate bias adjustment, which is neater than a thread and weight and also easier to set up. It is also supplied with an Audio Technica AT95E cartridge. The subplatter is said to be mass loaded for speed stability, and the motor is hung on rubber in the traditional Pro-Ject style.

One strange omission is an arm lead – there are phono sockets under the armbase and an earth lead in the box, but no interconnect. This seems a bit cheap given the cost of the package. The plinth is MDF with a high-gloss finish and the on/off switch is hidden under its front edge. Both RPM speeds are catered for, but require platter removal to make a change.

With The Chord Company Chameleon Silver Plus interconnects, the deck is highly engaging and entertaining: the TT50 has great timing and reasonably good bandwidth, too. Bass is a little on the soft side, though, and there’s also a slight softness to leading edges across the band (presumably related to the choice of cartridge), but this seemed to improve with run-in and didn’t get in the way of timing.

Next to a Pro-Ject Expression II it seems to track crescendos rather better, but lacks the bass definition offered by its Ortofon-cartridge-equipped competitor. Even when using the same Chord cable with both decks, the TT50 has the upper hand in terms of solidity.

A well established reference, the original Rega P3 (with Elys cartridge and arm lead), gives it rather more cause for concern and delivers a stronger overall sound with better dynamics and more precision. The Cambridge offers up its great sense of musicality, but the presentation is cruder, compared to the Rega P3.

The TT50 is an attractive and entertaining turntable there’s no doubt. Yet, compared to Rega’s excellent original P3 (£298) and the £250 Pro-Ject (now called the Expression III at £325), it does fall down on value.