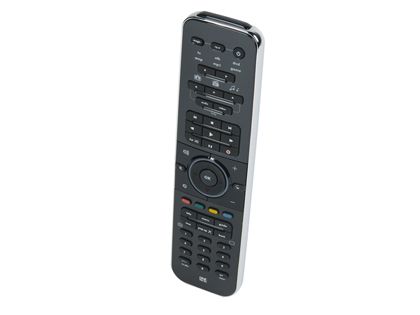 If it doesn't automatically find your device, you can revert to product codes to get it up and running

Universal remote controls come promising minimal handset juggling when turning on more than one piece of AV equipment at a time. But setting them up isn't always straightforward for novice users or sometimes even pros.

One For All thinks it has an answer in the form of the Smart Control, a budget priced remote that puts less emphasis on trawling through lists of product codes to gain control of your kit.

This is achieved via the 'Simple Set' system which involves pressing the 'Magic' button, pressing another confirming your device type – TV, set-top box, DVD, amplifier, MP3 player or Game – then another corresponding to the brand name as listed in the manual. Most major brands are covered.

If this doesn't work then you can punch in codes from the supplied list or the remote will try to learn what it is in a more conventional manner.

This involves placing the remote for the device you want to control in front of the Smart Control and pressing Magic to learn the functions of each button in turn.

For multiple devices, the Smart Control system allows simultaneous control of up to three using one of three macro buttons labelled 'watch TV', 'watch movie' and 'listen to music'. This is done by holding down Magic for three seconds, selecting one of the aforementioned keys and pressing a number corresponding to the desired combination of devices you want to turn on (e.g. TV set-top box and amplifier).

If you fail to get sound or vision from your target device, a 'help' feature involves jabbing the audio or video button until you get the right result.

The Smart Control's looks belie its budget pricing. It's reminiscent of the sort of zapper bundled with pricier TVs and has a rubberised backing which sits well in the hand.

Buttons including a central circular backlit navigation pad are responsive (it's a shame not all buttons can be backlit to use in low light) and reasonably well-placed, though we would have liked some differentiation in size for more intuitive navigation.

We had no problem getting the remote to work with our Sky+, Virgin Media V HD box, Xbox 360 and three-year-old Panasonic plasma TV.

While lacking such extras as internet updating (understandable at this price) the Smart Control succeeds admirably in reducing the 'fiddliness' often associated with a universal remote.