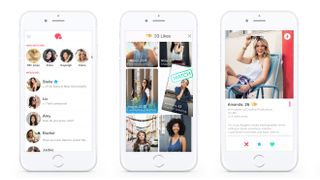 Tinder is testing out a new premium tier with additional features including one that users have been requesting for a long time, the ability to see who likes you before you like them.

It’s the age old dilemma, who shows the first sign of interest. What if you swipe and they don’t? What if you’re swiping away people who have liked you and then ending up with nothing. Nightmare.

Now it looks like you’re going to be able to pay your way out of the problem. And who says romance is dead? The premium tier is called Tinder Gold, and includes all the features of Tinder Plus which is the current paid-for version of Tinder.

Those features includes Rewind, which allows you to bring back accidental left swipes, Unlimited Likes, which is pretty self explanatory, Boost, which makes you a top local profile for half an hour, and Passport, which allows you to match with people outside of your area.

On top of all that is the new feature Likes You which, you guessed it, shows you who likes you. Anyone that has already liked you will show up with a gold circle around them and when you click on their profile a gold heart will sit beside their name.

Tinder Gold will be more expensive than Tinder Plus, but Tinder is still in the testing stage where it’s figuring out how much people will pay so we don’t have a price yet. According to TechCrunch it will be a similar deal to Tinder Plus that if you pay for a longer period (six months or a year) you’ll get a discounted price. Although paying for a year of a dating app feels pretty cynical.

Likes You makes a lot of sense as a feature but it does make us wonder if it’s actually a positive thing. The whole point of Tinder is that you only match when the like is mutual.

Knowing in advance means you may match just because they like you, or worse, not match with someone that you would have previously because they haven’t liked you yet.

According to the statement from Tinder: "Tinder Gold will begin testing in Argentina, Australia, Canada and Mexico in the coming days. We hope to roll it out to all our users soon."