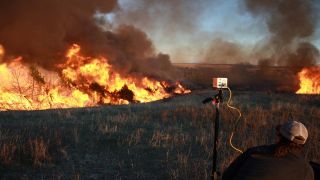 Ecologist Dirac Twidwell has a plan to restore the majestic grasslands of the United States' Great Plains. It involves drones, "dragon eggs" and fire.

Before European colonists came along, America's grasslands were highly prone to wildfires. These lightning-induced fires performed an important ecological role - spreading nutrients and killing off the seedlings of trees and shrubs to allow fast-growing grasses to dominate the ecosystem instead.

But today, firefighters work to extinguish wildfires before they can spread. This means that shrubs and trees start growing, making life difficult both for ranchers hoping to maintain quality grazing lands and for ecologists trying to maintain native habitats.

In recent decades, both groups have begun using "controlled burns" to clear land, but these haven't been wholly effective. "It's because we we're not burning hot enough," Twidwell says.

He believes that these controlled burns are too controlled - that the ideal conditions they're performed under prevent them from doing their work.

So he's experimenting with "extreme fires", which - believe it or not - is a technical term used in fire science since the 1950s. "It describes a fire that exhibits blowups and firestorms and other erratic and nonlinear behavior," says Twidwell.

Creating these extreme fires is difficult and dangerous, though. That's why Twidwell has invented a drone that can not only set a fire but also safely observe it from much closer than a human can, peering through smoke using an infrared camera. Field tests have found it to be highly effective.

It drops "dragon eggs" - small ping pong balls filled with a highly-flammable chemical called potassium permanganate. When injected with another chemical, glycerol, they undergo a oxidation reaction and the whole thing turns into a small fiery explosion - perfect for setting a fire.

Twidwell, along with his colleagues, described the system in detail in a review of the use of unmanned aerial systems for fire management, published in the journal Frontiers in Ecology and the Environment.

"Current fire management techniques are clearly inadequate for the challenges faced by fire managers, and technological innovations are needed," the paper says.

"In grassland ecosystems we are really data-poor in terms of fire behavior. We need finer scale spatial data and a lot of it to understand the effects of fire on ecosystems and we just haven't had the technology to capture it," adds Twidwell.

"Understanding the spatial context and intensity of fires matters whether your goal is to protect a house or restore a grassland ecosystem."