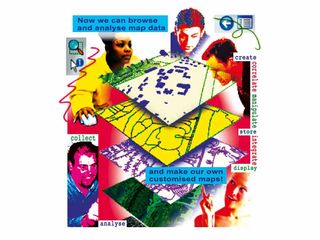 In the future, more data will be tagged with geographic information. Already, you can tag photographs on Flickr, for example. The trend is set to explode, and it's all because of GIS. This three-letter acronym means Geographical Information System – that is, any software system for creation, correlation, display and interactive analysis of geography-related data. Here we explain what it is - and why it's so important.

So GIS is about creating custom maps or browsing them with a computer?

There's a little more to it than that. The real reason to care about GIS is the ability it gives you to link generic data to real places, using information such as pictures, online travel diaries and census records. Many digital objects can have a geographical component and often gain much more meaning and value from such an association. The process of attaching a geographical location to a digital object is called geotagging or geocoding.

Couldn't a normal relational database do the same job?

Not really. Standard SQL rows, columns and queries can't easily handle the sort of irregular information you get in nature – think of a lake's shoreline, for example.

I can see how this would be useful to cartographers, but why should I care?

Well, besides being a lot of fun, GIS is a powerful tool for protecting your interests and helping you to be an active citizen/subject. With GIS you can create maps to show everything from landfills to LUGs, rock concert locations to carbon emissions and crime rates in your city or county. You could find all the construction permits your mayor granted near fault lines or airports, or map taxes paid versus public spending for defined areas.

Hold on. First, let's refresh some basic cartography concepts, valid for both paper and digital maps. This is necessary because, while every piece of GIS software knows how to do all the dirty work by itself, in order to use it you have to understand what kind of data it needs. There are several systems for recording coordinates, but the most familiar one consists of latitude and longitude (that is, the angular distances from the Greenwich Meridian and the Equator), plus elevation above sea level. Without coordinates there's no GIS, but you can associate them with almost everything – not just physical places.

Any other theory I should know?

There are also differing methods of projection to get to grips with. Paper maps and monitors are flat, while the Earth is round. It's mathematically impossible to reproduce a spherical surface on a flat one without introducing several deformations. Did you ever notice, for example, how the shape and size of places such as Greenland seem to change a lot from map to map?

By golly, you're right! But what's this got to do with projections?

The reason we make maps is to see the exact size and shape of a place, or, if you're trying to find your way around with a compass, to work out the angle between north and whatever direction you want to travel. Projections are mathematical methods for drawing the Earth in such a way that at least one of those parameters remains constant. A good, illustrated projections primer is at http://exchange.manifold.net/manifold/manuals/manifold/projections/projections_tutorial.htm.

Which projection is better?

The one that doesn't disturb what you're trying to do with your map. So, preserving the relative areas of different regions is enough when you need to know which country, lake or island is bigger, while unaltered shapes will enable you to distinguish easily between natural and artificial structures. But when you need to figure out the way home, you'll want a map made with a projection that doesn't mess with angles.