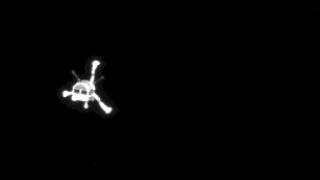 Remember Philae? The plucky little robot which landed with a bump on the rubber-duck-shaped comet 67P/Churyumov-Gerasimenko in November 2014?

Since the descent from its mothership, Rosetta, things haven't gone so well for it. Despite the precision of its landing, its legs failed to grip onto the surface of the comet, and it bounced twice before falling into a gully where it couldn't charge its solar panels.

It was able to perform 64 hours of experiments before its batteries failed, and it went into hibernation mode.

As the comet approached the Sun, it came back to life for a little while June and July 2015, but wasn't able to send back any further data.

"Time for me to say goodbye"

And now it seems like its mission is over. Yesterday, the robot tweeted a message to its 450,000 followers - "It's time for me to say goodbye. Tomorrow, the unit on @ESA_Rosetta for communication with me will be switched off forever..."

Stephan Ulamec, Philae lander manager at the German Aerospace Centre, told Nature that it's not an emotional moment for the team there, as the tiny robot has been silent for a year.

Rosetta had only kept listening just in case it spluttered back to life.

But now Rosetta, which is 520 million kilometres from the Sun and heading outward fast, is reaching the end of its own mission and the European Space Agency is turning off nonessential components. That includes the module which communicates with Philae.

Rosetta's final manoeuvre will take place on September 30, as the probe slowly crashes into the side of the comet facing Earth. It's hoped that it'll keep transmitting images and data until the last moment.

But that's all still to come, and today is Philae's day. So let's all spare a moment of silence for the little lander that never quite achieved its dreams.