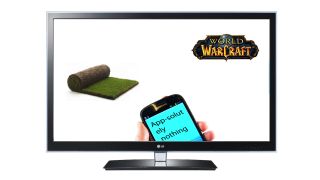 Turfing, apps and no Raimi

App-solutely nothing - We're hoping that it's more about confusion over what constitutes a tablet or perhaps an app, but we simply cannot help but wonder about the 3 per cent of people who told Ofcom they don't have an application on their tablet. Also, we're absolutely NOT backing the use of the word 'turfing' to describe surfing on a TV. [PR]

WoWsers - A World of Warcraft movie was always likely to be more of a level one Murlock than a level 40 Paladin dwarf but then Sam Raimi was attached as director and the world began to dream it could be a level 85 Death Knight. But now he's moved off the project so it's been nerfed. Big style. [MCV]

Ring-ing it in - Just in case you hadn't noticed, the Olympics is nearly here! Which means that virtually every press release we get has a tenuous connection to this Summer's London-clogging sports fest. Today we have Samsung teaming up with Three and Victoria Pendleton on an app, and Linford Christie in PC World to, erm, something something something. Did we mention it's the Olympics? [PR]

Linford illustrates the size of his lunchbox

Ringing it in pt II - On a similar theme, Auntie BBC has always had a special place in our hearts, so we were delighted that its been given the rights to cover the next four Olympic Games. Now if it could just pay our fine for accidentally driving in the Olympic lanes and unblock the Jubilee line we'll be very grateful. [Hollywood Reporter]

Them and US - Judges are clearly people who understand the weight of words, who carefully consider what they are saying and the repercussions. Unless they are in charge the Kim Dot Com case clearly and suggest that the US is the enemy. Doh. [NZHerald]

MiThreeFourFi - We're thinking 'What's in Woz's bag' is definitely a starting point for a whole new quiz show (hands off Noel – this one's ours) but we're not betting anyone would guess two 3G MiFis AND two 4G MiFis, which is clearly overkill. [Gizmodo]

Faux-lex - Interpol is trying to help people work out if their goods are fake or real with a handy scanner app. We were shocked to discover our Kalvin Kline undies are not kosher. [Physorg]

Key to success - Somewhat predictably a 3D printer could be used to print the keys to popular-brand handcuffs and potentially give criminals the means to escape. As smuggling in a 3D printer to jail would probably not be that easy, we're reckoning this would mean a bit of planning. [New Scientist]

Graphene Gorge? - Graphene has been touted as a miracle product for a tech lifetime (since 2010) but it has a few problems. The good news is that scientists are getting closer to making it the next generation material in chips, the bad news is we might have to rename Silicon Roundabut already. [BBC]