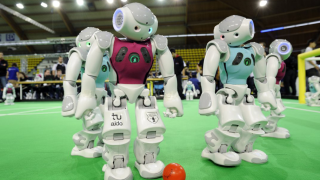 In Hefei, China, an annual competition to find the world's best robot footballers has begun, with the eventual goal of beating the winners of the human World Cup.

Teams from 45 countries across the world have entered teams into five different leagues. There are competitions for small-, medium- and human-sized robots, as well as divisions for software coders all using the same hardware and even a division that runs football simulations with no hardware at all.

The tournament was started in 1997 with the aim of eventually beating human players at their own game. But right now, that goal seems pretty far off - there's a lot of falling over, and accidental kicking of other robots instead of the ball.

Here's a video from the qualifiers showing what you can expect - skip to 14m52s for a cracking goal from the half-way line.

What's more, the organisers are ramping up the difficulty for the finals this year. Astroturf has been added to the flat playing surface, making it even easier for smaller bots to fall over, and the ball has been painted white, making it harder to see.

Daniel Polani, from the University of Hertfordshire - one of the favourites in the tournament and last year's second-place winner - told the BBC: "We would like to win, but every game needs to be won."