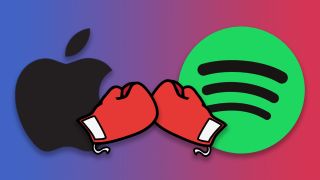 Update August 26: The Spotify and Apple fight has gotten even uglier, as an August 26 Bloomberg report alleges Spotify is actively burying search results for musicians who have exclusive deals with Apple Music.

In response, a Spotify representative told Recode that allegations artists are being buried in its search results are "unequivocally false," though they didn't deny other elements of the Bloomberg article.

The report's anonymous sources said artists who've given Apple exclusive access to new music have been told they won't get their tracks on featured playlists once the songs become available on Spotify.

The story goes deeper, with one unnamed source claiming this strategy of refusing to feature artists with Apple Music exclusives has gone on for about year, with other sources claiming Spotify only recently ramped up its efforts over the last few months.

The news comes on the heels of Frank Ocean's Blonde album, one of the year's most anticipated releases, and an Apple Music exclusive.

While big artists like Drake and Chance the Rapper, who've both had Apple Music exclusives, rely less on visibility to continue being successful, lesser-known artists are afraid of angering Spotify. One source claims a representative of a singer-songwriter cancelled plans to debut a song on Apple's Beats One radio show in fears of retaliation from Spotify.

But exclusives won't be around for much longer, if the head of Universal Music Group Lucian Grange is to be believed. Universal owns about 80 record labels, and could set a precedent for the rest of the music industry for abolishing exclusives.

Spotify, with its 30 million paying subscribers, still overshadows Apple Music's 13 million. Despite having so many subscribers, Spotify is still struggling to turn a profit, in part because it pays 55% of its $2 billion revenue to traditional labels, according to The Wall Street Journal.

Read on for earlier developments in Apple vs Spotify:

A battle between two music streaming giants is heating up, and it's putting users right in the middle.

Spotify publicized an ongoing battle with Apple on June 30, stating in a letter that the Cupertino firm is intentionally making it difficult to update its iPhone app. The Spotify app prompts users to sign up for a subscription online instead of using Apple's in-app purchase system, which is in clear violation of Apple's developer guidelines.

Apple responded on July 1 with it's own letter saying Spotify needs to follow App Store rules, rather than ask to be an exception to them.

It's a confusing fight that has implications beyond just Spotify and Apple. On the surface, it's a clash of competing music subscription services, but dig deeper and the real battle is over Apple's 70/30 revenue share with developers.

To truly understand what's going on, let's take a closer look at each side's arguments.

In a letter written by Spotify general counsel Horacio Gutierrez to Apple general counsel Bruce Sewell, and reported on by Recode, Gutierrez says Apple's refusal to allow its updated app into the App Store is anti-competitive, as developers are required to pay Apple a 30% cut of all in-app purchases, including subscription purchases.

Since Apple has its own Apple Music subscription service, Spotify argues Apple's 30% cut is an unfair advantage for Apple Music.

"[This] continues a troubling pattern of behavior by Apple to exclude and diminish the competitiveness of Spotify on iOS and as a rival to Apple Music, particularly when seen against the backdrop of Apple's previous anti-competitive conduct aimed at Spotify […] we cannot stand by as Apple uses the App Store approval process as a weapon to harm competitors," wrote Gutierrez.

Furthermore, Spotify argues that Apple is being unreasonable by not allowing it to tell customers that they can get a cheaper subscription on Spotify's site.

Spotify has gone as far as to distribute its letter to US government officials. Senator Elizabeth Warren allegedly received the letter and criticized Apple, Amazon and Google for anti-competitive practices. Warren specifically called out Apple for using its "control of iOS to squash competition in music."

Apple publicly responded to Spotify by publishing a letter written by Apple general counsel Bruce Sewell. In the letter, published by Buzzfeed News, Sewell essentially tells Spotify to follow the rules instead of asking for an exception.

"We find it troubling that you are asking for exemptions to the rules we apply to all developers and are publicly resorting to rumors and half-truths about our service," writes Sewell to Horacio.

Apple goes on to say that all developers that use its App Store follow the same rules, and it's true. Every developer that makes money from in-app purchases is required to give Apple a 30% cut. Apple has a rule in place that allows subscription services to pay a reduced 15% cut after a year of service.

"There can be no doubt that Spotify has benefited enormously from its association with Apple's App Store. Since joining the App Store, in 2009, Apple's platform has provided you with over 160 million downloads of your app, resulting in hundreds of millions of dollars in incremental revenue to Spotify," says Sewell, digging into Spotify.

Apple is certainly in its right to make rules for its own platform, and Sewell notes Apple is not in violation of any antitrust laws.

It's tough to say who's right and wrong here. Apple is legally following rules and should make money from developers hosting their apps in the App Store. However, Apple does have an advantage of selling its own products and services in the App Store. Apple doesn't have to pay a 30% cut to anyone, and can therefore build a seamless user experience.

Looking at this battle as a consumer, however, Apple is creating an anti-consumer experience. In an attempt to circumvent Apple's 30% cut, many developers have resorted to removing the ability to make purchases in their apps altogether, degrading the user experience.

Apple's developer guidelines spell out when in-app purchases are required (emphasis mine):

"If you want to unlock features or functionality within your app, (by way of example: subscriptions, in-game currencies, game levels, access to premium content, or unlocking a full version), you must use in-app purchase. Apps may not include buttons, external links, or other calls to action that direct customers to purchasing mechanisms other than IAP."

Let's take the Kindle app, for example. On iOS, you can only sample books or add them to your wish list. iPhone and iPad users will have to go into the Amazon app or navigate to Amazon's website in order to purchase books. On Android, users can purchase books directly within the app as Google doesn't require developers to use its payment system exclusively.

Competing app stores from Google and Amazon also take a 30% cut from in-app purchases, but they don't restrict developers from adding alternative methods of payment. This is why Spotify users on Android can purchase a subscription using a credit card or PayPal instead of using Google's payment system.

I think Apple is in its right to charge developers a fee for using its App Store, but what's a reasonable fee is debatable. As a consumer, I'd rather Apple compete with superior services rather than creating an atmosphere where developers need to remove functionality from their apps in order to avoid paying Apple. It's frustrating that I can't purchase books in the Kindle and ComiXology app. It's disingenuous that Apple doesn't allow developers to let customers know that services and products are cheaper when purchased via a company's site instead of within the app.

There needs to be a compromise, but what that compromise looks like is unknown. It's up to Apple and its developers to figure it out. The iPhone is nothing without its great selection of apps, and developers wouldn't have as much reach without Apple's App Store.

In the end, it's consumers that hurt while Apple and Spotify figure out how to compromise. It's frustrating not being able to purchase what I want, and how I want. If customers don't mind paying the extra 30% that Apple charges developers to use its payment system, great. But, if I want to save money by purchasing a subscription via the web, I should be able to.