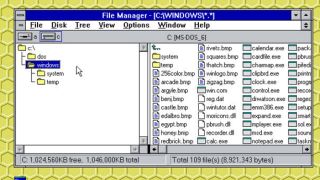 In advance of an already-divisive major Windows 10 update, Microsoft has released a fun, little open-source Easter egg for its longtime fans: the Windows 3.0 File Manager.

Available now in its full source code on GitHub, anyone can access this tool and manage their files the old-fashioned way. That is, with file trees and pixelated iconography.

Microsoft made the code available on GitHub through the MIT OSS license, allowing it to compile and render under Windows 10. This means that you will be able to manage your files within this retro environment.

In fact, it’s so delightfully retro that File Manager actually uses an MDI, or multiple-document interface, to represent your files in windows within the main application window. That might seem trite today in a computing world where every app and even every file is its own window, but for much of Windows’s life that was the norm.

This gift to Microsoft’s longtime fans comes at a relatively tough time for Microsoft (and the tech community at large, privacy-wise). For one, folks don’t seem to be happy with how the imminent Windows 10 Spring Creators Update is panning out. And, two, some Microsoft fans aren’t happy with how it implements these throw-back features as it relates to privacy, as discovered by TechCrunch.

“Most of the MSFT open source stuff is either trash or completely unmaintained,” one Hacker News reader noted following the release. “Only a couple of high profile projects are maintained and they jam opt-out telemetry in if you like it or not (despite hundreds of comments requesting them to go away). Even Scott Hanselman getting involved in one of our tickets got it nowhere. Same strong arming and disregard for customers.”

At any rate, feel free to play around with this relic of the past in your present-day Windows computer – just maybe opt out of those telemetry ‘features’.