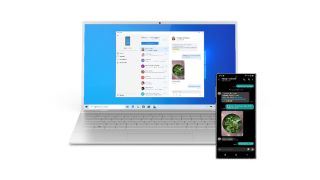 Microsoft has been beefing up Your Phone with new features on a regular basis, and a further fresh piece of functionality is apparently incoming – namely the ability to easily transfer content from your Android phone to PC (or vice versa).

As Windows Latest reports, the most recent build of the Your Phone app for Windows 10 contains a number of mentions of a ‘content transfer’ feature, with the following references spotted in the application’s code:

This feature isn’t actually in the app yet, but Windows Latest managed to enable it, and while the functionality didn’t work – unsurprisingly – it did give the tech site a glimpse of the feature.

Specifically, under Settings, a ‘cross-device copy and paste’ feature showed up which could be enabled by clicking on a slider – with the note that “some metadata will be transferred between devices each time content is copied on phone or PC”.

The idea would seem to be to let the user easily transfer content between their smartphone and PC, although it’s not yet clear exactly what content that might be. Presumably, it will be commonly used files such as documents and media (photos is mentioned in the code, as highlighted above).

While there are other ways to transfer or sync content between your phone and PC, having direct integration in the Your Phone app would obviously be very convenient for users; and it never hurts to have more options.

Microsoft has been busy adding features to Your Phone at a rate of knots, as we mentioned at the outset, including a ‘phone screen’ capability which mirrors your smartphone display on your PC monitor, effectively allowing you to use your phone with the PC’s mouse and keyboard.

One of the most recent additions (for testers) has been a function whereby any drawings or jotted notes done with a stylus on the touchscreen of a Windows 10 PC are transferred to the phone’s display.

Don’t forget that you can also make phone calls direct from your PC using the Your Phone app, as well as texts.