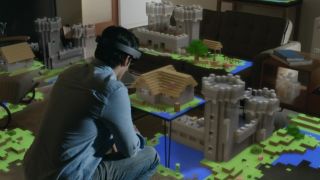 In what would be a potentially big coup for Microsoft's HoloLens, a Disney Interactive executive has said that augmented reality could end up being the place for its Skylander competitor, Disney Infinity.

While this doesn't confirm that Disney's toys-to-life platform will be heading to the HoloLens, it does show where some game makers are seeing the two different technologies' advantages and disadvantages.

One of the issues with current VR technology is that the fully-immersive headset isolates the user, making it challenging for more social games.

On the other hand, AR technology, like Microsoft's HoloLens, isn't as isolating. The headset and software keeps you within sight of your own surroundings, making it generally a better fit for social and family-friendly games, like Disney Infinity.

Now, if we could get both AR and VR onto one piece of hardware, things would get much more mind-blowing real fast.