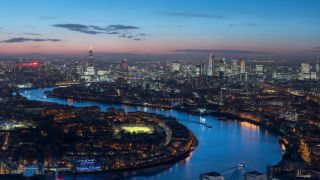 We've all seen some pretty stunning gigapixel images in the past - a composite image made up of multiple images to create a single 1 billion pixel image that has staggering amounts of detail, but things have been taken up a notch with this stunning gigapixel time-lapse panorama that's been dubbed a 'Gigalapse'.

A collaborative effort from photographer Henry Stuart of Visualise, Lenstore, Nikon and the Canary Wharf Group has managed to capture a 7.3 gigapixel (7,300MP) time-lapse image looking across London from 1 Canada Square over a 24 hour time period. You can check it out below or visit Lenstore's dedicated 24 Hour London microsite.

Using a Nikon D850, which already gave the team a head start with its 45MP full-frame sensor with excellent dynamic range, the camera was used with a Nikon 300mm f/2.8 prime telephoto lens, which meant images could be captured in such detail that you can easily read signs up to 5 miles away in the photo.

A total of over 6,240 photos were taken across a 155 degree view of the city over 24 hours, and subsequently stitched together to provide the seamless view of London. To achieve this, a robotic motion control technology was employed - more often used for Hollywood films such as Gravity, to allow for accurate fast-sweeping shots to be captured and was necessary to create the pinpoint accuracy of images, leading to every single pixel of every point in the panorama being the exact same position as the photos 24 hours earlier.