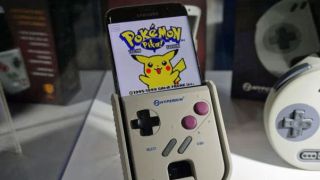 People are enjoying those games - titles like Pokemon Go are innovative and pushing what we expect from mobile games - but Nintendo should go one step further and offer retro Game Boy games directly on your phone.

The internet is alight right now with hype for a Nintendo Game Boy case that attaches to your Android phone and allows you to play cartridge games with the top of your phone’s display.

The genuine excitement from fans for this device – which you can pre-order now for £59.99 (about $78, AU$100) from Funstock Retro – is the only reason it has been created.

Originally the Smart Boy case started out as an April Fools Joke created by accessory manufacturer Hyperkin. Now just over a year later, the company has created the actual case itself and made it compatible with the Samsung Galaxy S8.

Other phones with 5.2-inch to 6-inch displays and a USB-C port at the bottom will also work, but the smaller flagship from Samsung will offer the optimum experience.

The case looks fine, but it’s a complicated system for you to then be able to play cartridge games on your phone. It’s similar to playing on an actual Game Boy Color in terms of the size of the device and taking the case and cartridges around with your isn’t going to make for the most portable gaming experience.

Nintendo can learn from this excitement though. People do really want to be able to play early Pokemon and other Game Boy games directly on their phone.

It is possible to play retro Nintendo games on your phone using an emulator – something Nintendo won’t benefit from at all – but that’s a legally sketchy area and isn’t as simple as paying for a game or two from the Apple App Store or Google Play Store.

Instead, Nintendo should offer a few of the original Game Boy Color games people want to play on the respective mobile stores.

This won’t eat into games such as Pokemon Go or Super Mario Run. Both of those titles offer an entirely different experience to most original Game Boy titles, plus the former is a free-to-play game.

Now especially feels like the perfect time for Nintendo to make that jump.

The release of the NES Classic Mini and now the upcoming SNES Classic Mini shows the company has interest in retro gaming and bringing back some of its vintage games to new and old audiences alike... so why can't that be on mobile?

At a time when Sega has released its own titles such as Sonic The Hedgehog, Kid Chameleon and Phantasy Star II onto mobile platforms, it feels like we're a step closer to Nintendo finally biting the bullet and deciding to enter the mobile gaming market with its older titles.

I don't want Nintendo to stop experimenting with its new mobile titles like Pokemon Go or Super Mario Run... I just want to be able to play the original Pokemon games on my smartphone without having to take along a huge case for £59.99 (about $78, AU$100).