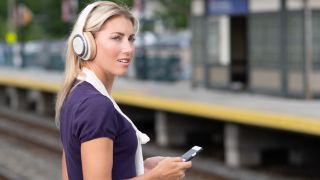 These over-ear headphones promise a staggering 100 hours of battery life – that's over four days of continuous music playback, meaning you can ditch those tatty wired earbuds you keep in your bag for emergencies.

You'd be forgiven for thinking that huge capacity means the Cleer Audio Enduro 100 wireless headphones will take ages to charge; however, Cleer Audio says that the over-ear cans only require "five minutes of charging time to hold an hour of playback".

These wireless headphones should sound pretty good too, using Cleer's patented 40mm Ironless drivers, which apparently provide "low distortion and high resolution no matter the volume level" you're listening at.

Cleer's Ironless technology uses a set of stacked magnets to achieve an "even and symmetrical confinement of the magnetic flux within the driver."

The company claims that, unlike the usual arrangement of "soft iron parts and a single magnet," its drivers ensure that the the transducer motor is "free from distortions, creating a balanced and dynamic sound".

(If you're not familiar already, the transducer is the part of the driver that converts electronic signals from your device into the vibration of the speaker cone and diaphragm.)

The Enduro 100s support AAC and aptX HD low latency support, so they should hold up whether you're listening to music or bingeing your favorite Netflix show.

While you can use the wireless headphones with any Bluetooth-enabled device, they're optimized for Android, offering Google Fast Pair 2.0; Cleer Audio says that you just "simply turn on the headphones and the pairing request will almost instantly appear on-screen".

Of course, looks are an important consideration when buying a new pair of over-ear headphones – and these cans look pretty swish, coming in subtle grey and white, and white and sand color schemes.

While we're waiting on a firm release date, Cleer Audio has confirmed that they'll be available to buy from September in the US and UK, for $179.99 / £169.99 – much cheaper than our reigning wireless headphones champion, the Sony WH-1000XM3.