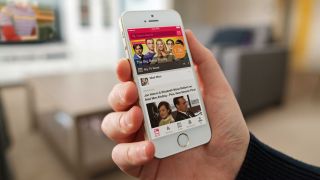 In a few short years the face of television has changed. No longer are broadcasters in charge of what and where you watch: now you are.

The meteoric rise of on demand and watch anywhere programming took much of the television industry by surprise; it meant its usual glacial pace was thwarted and big changes had to be made.

Some broadcasters moved faster than others. The BBC showed that with iPlayer, there was still a reason for its being in a world that was no longer shackled by schedules. But when it was released in 2007, it was a service that was used mainly by the computer literate and not the average BBC user who tunes into EastEnders.

When Anthony Rose joined the BBC he decided to turn this around by making the software available to all. And seven years later he is making the same move again, but with his current company Zeebox.

This week, Rose announced that Zeebox is changing its name to Beamly. This brand revamp is the culmination of months of work, with Zeebox changing from a utility app - where the idea of its users was modelled more on him and his band of devs - into what Rose wants to be "the social network for TV".

"Zeebox was all about the television and now Beamly is about the TV show."

"What we have seen over the last six months is that once upon a time, Zeebox was all about the television and now it is about the TV show," said Rose to TechRadar.

"It used to be about the utility of controlling your television, your tags and syncing with shows. But now more and more people are watching on-demand, with shows like House of Cards.

"We love people that like the utility [side of the app] but the problem is they don't tell their friends. But people who chat in TV rooms speak to their friends and that's when you get a social network."

As with his transformation of the iPlayer, making changes to appeal to the masses is nothing new to Rose. Taking that technology, simplifying it and putting the shows on that the general TV population was watching was key to the massive success of the platform, as much as, say, iPlayer's arrival on mobile devices.

With Zeebox, Rose and his team looked at the how and when people were using the app - they could clearly see that when changes that showed off the social side were made, use of the app exploded.

"When we started the company, we were super served internally with male geeky guys, essentially people like myself. And this meant we automatically leaned to engineering the utility side of Zeebox," said Rose.

But there was a problem: it turns out those "geeky guys" that were originally targeted don't actually watch television that much.

"So we started advertising for colleagues that love shows such as Made in Chelsea and EastEnders.
They came into the office and told how they watch these shows and it became clear that the biggest group of 'social watchers' were the ones that watched the X Factors and the Big Brothers of the world.

"For them, the remote aspect of the app wasn't what they wanted, but more a fix of updates about their favourite shows that they could read over lunch."

Once Rose and his team began tweaking the app towards that, they saw things take off in a big way - it turns out that those who use the social side of the app were staying on Zeebox for 10 times longer than those who just used the tech tools that it is also known for, such as tagging, show syncing and remote functionality.

Unsurprisingly, the tonal shift of the app meant that the audience was changing too.

"65% of Zeebox users are now female, since this shift six months ago - particularly in the US. We are resonating with the same sort of audience that Pinterest has, where it is women at home, extremely social that want to talk about shows twenty four seven," said Rose.

The fruits of this change can now be seen in Zeebox's rebranding to Beamly. A softer coral colour scheme - and, dare we say it, a more iPlayer-like look - has been used and the social aspects of Zeebox that were out of sight before are now front and centre.

The geekiness of Zeebox that was at odds with the social side of the app has seemingly vanished.

"The homepage has become your feed home, which houses not just what you are posting but what your friends are too. We are hoping that this homepage becomes the social network for TV," explains Rose.

"The design looks very clean. It was bit like renovating a home. Zeebox had become a mismatch of styles and we wanted to give everything a new style."

Interestingly the utility side of the app is still there but Rose has pitch shifted this to the sidelines to make way for what he hopes will be another social network that the world flocks to.

Beamly comes at an interesting time for TV and social networks. Both Facebook and Twitter are looking into utilising television but neither have yet succeeded.

This isn't for want of trying as these social giants are gearing up for a data turf war with each other, giving television broadcasters information about how who comments on their shows.

Facebook is doing this in partnership with SecondSync, offering anonymised data of its 1.23 billion users' TV habits - while Twitter has a deal with Nielsen in place.

Data mining only works if you have the right information, though, and Rose believes you can only get this somewhere like Beamly.

"With Twitter, most don't want to mix your professional life with talking trash around something like Hollyoaks. So, how do you keep that separate?"

Rose believes the solution is an updated, better-looking forum scenario that can be found in Beamly.

"Our TV rooms are resonating because of this. They are vibrant, especially with the new style and brand.

"As for analytics, for major broadcasters we provide publishing tools that will help change television in the future. This is boring for the consumer but will be essential for broadcasters and advertisers."

Changing television in the future is something that is key to Rose. Having already been part of the success of iPlayer, as well as an integral part of YouView, there is no better person placed to understand the machinations of the broadcast industry: the reasons there are struggles to innovate when it seems so obvious to us consumers that television should be delivered to us how we want it, when we want it.

This is something Rose wants to see too and firmly believes that Beamly has been created to be part of the TV model that we will all eventually use.

"Second screen apps are slightly ahead of the curve and television hasn't changed as fast as app manufacturers innovated," he said.

"I see this in ourselves where we have dialled down some of the app. We always wanted to be the social network for TV but when we got started we were faced with broadcast television, not TV anywhere.

"There is no doubt in anyone's mind that we will be watching television in a vastly different way in five-to-10 years. TV watching will be where and when we want on any device and we will be speaking to our friends and interact with the shows we watch.

"Beamly has to resonate with that and offer what people want."