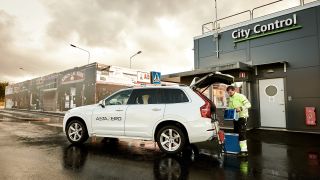 The Swedish government has unveiled the world's most advanced testing facility for self-driving cars. The AstaZero 5G test facility, located in Gothenburg, can replicate real-world traffic, as well as hypothetical scenarios where cars share the streets with drones, cyclists or pedestrians.

The facility is a joint project of the state-owned Research Institutes of Sweden (RISE) and Chalmers University of Technology, and engineers hope it will accelerate development of autonomous vehicles up to 10 times.

Between simulation and reality

Safety is one of the biggest sticking points preventing widespread adoption of autonomous cars and trucks - partly due to the huge difference between full simulations and real-world driving.

"If you have a controlled and repeatable environment, when it comes to security and safety, we are a very good step between simulated systems and a physical proving ground," Peter Janvik, CEO of AstaZero, tells TechRadar.

"Then you can go into cities with closed-off streets and the like. By having a closed, repeatable environment with mixed reality, you can accelerate development."

The facility features a track that can combine virtual environments (such as the notoriously busy Arc de Triomphe traffic system in Paris) with real people and test vehicles, creating new and realistic test environments.

The aim is to provide the data necessary to predict how vehicles will behave, without rushing into real-world testing.

Another factor holding back autonomous cars is the lack of consistent safety standards. In other words, how do we define 'safe enough' when it comes to self-driving vehicles?

"My personal view is that we need some common way of looking at it," says Janvik. "I think some part of the test scope of an automated vehicle should be comparable to others, so you have a baseline. It's not so important who does it, but it's important that it's done."

Complying to existing standards is another tough challenge - particularly when software is constantly evolving and adapting in response to changing environments.

"Imagine some aspects of the software development like ISO 26262, which requires you to be able to analyze and totally understand the software," Janvik says. "With elements of AI or deep learning, it may not be fully understandable

"Finally, the jury is out on how to do testing of self-driving vehicles. For example, RAND has shown that to do it on ordinary roads, you drive to Venus and back to get enough mileage to build trust.

The AstaZero 5G test facility is the first of its kind in Europe, and the Swedish government has implemented a strategy to make the country the preferred test bed for trialling autonomous cars. However, Janvik wouldn't rule out extending the project's reach.

"If there was a need in another location - whether it was another part of Sweden or international - we would definitely look into it," he says. "Our mission is to try to accelerate the shift from today's transport system to the safe and sustainable system of tomorrow. If moving into other places helps us do that, then yes."