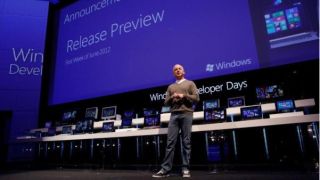 That logo looks a bit dated

Microsoft has confirmed that the Windows 8 Release Preview will be out in the first week of June 2012.

The fledgling OS is already in Consumer Preview mode, which is fancy Microsoft-speak for beta, and it's not yet clear what differences there'll be between the two preview editions.

We're expecting the full Windows 8 launch to happen in the latter half of this year, at which point Windows 8 toting hardware, including a rumoured 32 Windows 8 tablets, will also be released.

Microsoft has been fairly open about Windows 8's progress, last week detailing the various versions of the OS; Windows 8, Windows 8 Pro and Windows RT. Windows RT is the edition that will run on ARM architecture.

What all versions of the system will feature is the freshly designed Metro interface, bringing the Windows 8 computers and tablets more in line with Microsoft's Windows Phone software.

All that work redesigning the Windows experience and someone at Microsoft still messed up by using the old Windows logo in the slideshow used to announce the Release Preview release date in Japan. Oops.