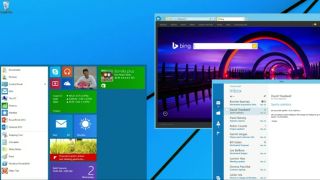 Windows 9 is expected to be very desktop-oriented

Last May we learned the Windows 9 preview could come by 2015. Now word on the internet street says the preview version of Microsoft's operating system could launch much earlier than anticipated.

Microsoft sources told ZDNet that the next version of Windows OS, codenamed "Threshold," will arrive with a preview build in a few months time. While the preview date has been moved up from a previously rumored February release, Windows 9 is still expected to drop in the first half of 2015.

The same sources also say Windows 9 will have more features designed for desktop-oriented users than Windows 8.1. The new version will rely more on a mouse and keyboard, and touch will become an optional input, rather than a focus.

One of the most notable additions, or reintroductions, that reflects this is Threshold's inclusion of the Mini-Start menu.

Originally demoed at Microsoft Build 2014, this revamped menu bar will include the usual list of applications. Plus, users will supposedly be able to pin Metro-styled live tiles to the start menu.

On top of being more desktop focused, Windows 9 is said to transform itself based on the hardware it's installed on.

PC and laptops will receive a SKU version of Windows that brings the desktop to the forefront of the interface. Transforming laptops, such as the Lenovo Yoga 2 11 and the Surface Pro 3, will start with the Metro splash screen and switch to Windowed mode when the keyboard is in use.

Other tablet and phone platforms won't have a desktop at all. Devices might be able to run apps side-by-side similar to the Samsung Galaxy S5.

Along with the new Windows 9 details, Microsoft is rumored to be delivering the next Windows 8.1 update this August.

Reportedly, this second and final update will come will just a few UI adjustments and tweaks, but nothing majorly game changing. It seems Windows 8.1 is destined to fade away into obsolescence much like Vista.