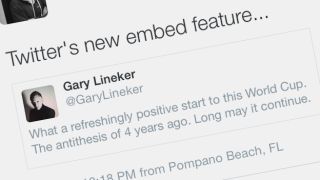 Twitter is experimenting with a brand new feature for users of its iOS and Android apps - the ability to embed tweets within their tweets.

The embedding tool, which could become an alternative to retweeting or straight-up quoting tweets, can be enabled by copying the link to a tweet you wish to embed and pasting it within the tweet you're composing.

It may not be entirely straightforward, but the result is the tweet appearing below your own a la a photo, video, vine or web-link preview, rather than a URL link to the update.

Twitter often tries out new features on a selection of its users before rolling it out to the full crowd, so it's far from certain it'll become a standard feature, however there are many good arguments for introducing it.

This feature, perhaps simplified with an embed option alongside retweet and quote, would solve both of those problems.

According to The Next Web, the feature is available as part of the latest update on iTunes and Android.