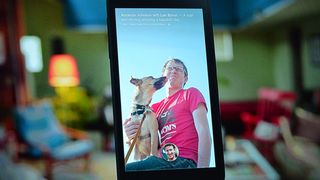 The Facebook Home lockscreen is due for a makeover, though when is still up in the air.

One of the software's monthly update will at some point bring with it Instagram and "other social content," presumably from third-party sources, to the Home lockscreen.

Zuckerberg also admitted that Home hasn't been adopted as fast as he would have thought, though he "fully believes that people will want it over time."