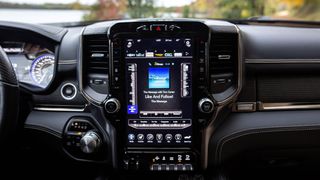 A massive new 12-inch screen is the centerpiece of the 2019 RAM 1500 truck, a redesigned model with plenty of extra safety and tech features (some a first-ever). This is the largest screen ever in any truck, and it’s a great way to experience how tech is evolving in vehicles.

The first you notice is that there is way more space for all of the settings, apps, climate controls, and radio options. This is a good match for the spacious cab, which feels like you are driving a yacht (I mean that in a good way -- there’s room to stretch out). Because the screen is so big, you can reach over and enable the seat warmer, flip through radio stations, and access the GPS navigation without having to fumble through tiny icons and a small, dainty screen.

My favorite feature on the massive screen is when you access XM radio. On most stations, the album cover for the artist and song you are listening to appears in the big screen. I listened to a classic rock station and up popped the album cover to After the Gold Rush by Neil Young. It’s cool because the bigger screen means you can make out the album title and artist name. Usually, on most car displays, you might be able to see those details if you squint.

The navigation screen really popped as well. In a more urban area, with building and multiple road connected like a plate of spaghetti, it’s actually less stressful. You can see where roads connect.

In another surprise, the nav screen shows animated waves for lakes. That’s a nice touch, and it might even help you find your way to a downtown parking lot any easier. Everything is enlarged, easier to identify, and brighter and more colorful in 12 inches.

My only slight complaint here is that you can show so many multiple options all at once. I managed to have some climate control settings like the heated steering wheel button and the one for heated seats up at the same time as the radio, and other time while driving I had both the settings screen (for configuring the display and the truck itself, for example) and the radio up at the same time. As you drive, because the display is so big, it can look a bit cluttered.

That’s mostly my own testing scenario that interfered, though - most truck drivers will be happy to have the nav up full-screen and won’t try to run multiple sections for climate, radio, and nav all at the same time. That said, because the display is so big, you may stumble into the same scenario where you have too many icons and too much text up all at once.

Besides the new display, I also loved how RAM Trucks designed the new charge pads for your phone. I tested an Apple iPhone XS Max, and it fit nicely into a little slot on the pad below the 12-inch screen. There’s even a little notch below the pads for connecting a USB cable. When I placed the iPhone XS Max on the pad, it started charging right away. You can slide the cup holders forward to hide the charging bay as well as an extra security measure.

Overall, the RAM 1500 has one of the best screens I’ve used in any vehicle, including the Tesla Model S. As long as you avoid having too many icons up at the same time, it feels like you have way more control over features and can see everything easier in living color.