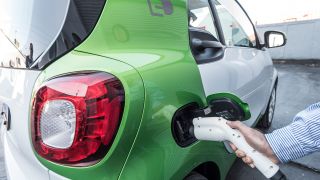 Smart's line of teeny-tiny cars have been "cute" since day one, but the 2017 Smart Fortwo Electric Drive is something more. More mature, more stately, more refined. It's all grown up – or, as grown as a 106.1-inch vehicle can be – and we recently had the chance to cruise around Miami's ever-present gridlock.

Miami, like many cities around the world, is known for a couple of things. One of those is incessant traffic, and troublingly, the other is a pitiful public transportation system. Strangely enough, that's great news for Smart, as the citizens of those very locales are perfect targets.

In speaking with Annette Winkler, Head of Smart, she noted that Smart isn't terribly bothered by Chevrolet's Bolt EV or the Tesla Model S. Both of those a) are expensive and b) are trying to be an actual car in which you drive to actual places. The Smart Fortwo Electric Drive, however, is engineered to really know just two places: home, and work.

With an estimated range of 70 to 80 miles (112 to 128 kilometers) on a full charge, the to-be-priced Fortwo Electric Drive provides enough juice to get the average urban dweller to and from work, with a quick stop by In-N-Out Burger coming or going.

In Europe, that probably doesn't strike anyone odd. In the US of A, however, Smart is going to have a tough time overcoming one particularly thorny challenge. Americans don't buy cars to meet their averages; they buy cars to meet extremes. This is why car manufacturers can sell 7-seater SUVs all day long to people who will actually put seven humans in that vehicle a grand total of twice.

Still, it's wise – Smart, even – to not tussle with the likes of Chevy and Tesla. By shipping a car with such an abbreviated range, it cannot be seen for anything more than it is: a way to get from home to work and back, assuming work is in a clustered city center.

It should be noted that the refreshed Fortwo Electric Drive looks substantially better than last year's model. It's a massive leap forward from an aesthetic standpoint. It looks far less like a cheap commuter car and more like a substantial automobile that just happens to be bantam.

The grille, lights, wheels, and interior have all been notably improved, and when you sit inside, you get the sense that this truly was dreamed up in the same factory that believes in "the best or nothing." (Psst... that'd be Mercedes-Benz.)

In a sense, this is just one big (small?) rolling gadget. An 80 hp electric motor is situated at the rear, producing 118 lb-ft of torque that is immediately available from a standstill – a 23% increase over the 96 lb-ft offered by the previous generation. Underneath, you'll find 17.6 kWh of battery capacity. If you plug it into a wall outlet in your garage you'll see it go from empty to 80% charged in a whopping 13 hours, but those who spring for a Level 2 wallbox (which will run you around $450/£360/$593AUD) can get to that mark in just 2.5 hours. For reference, topping it completely out at 100% charge takes a total of 3 hours if it's completely exhausted.

It's like those R/C cars you used to build as a kid, but this one requires insurance to operate.

The interior touches are quite impressive given the price. Seats are comfortable, shockingly roomy, and there's ample headroom. The fabric on the dashboard and the cute (but no less effective) charge gauges are both laudable inclusions. We did find ourselves yearning for auto hold – a feature found on Mercedes vehicles which automatically holds the car in place once you've rolled to a complete stop. In the stop-and-go traffic that the Fortwo Electric Drive is built for, it'd be a welcome inclusion.

Operating the Smart Fortwo Electric Drive is – much to our amazement – not all that much different than operating any other car. The cabin's roominess makes you forget just how short it is, and save for an awkward blind spot, it's really easy to get in and move. Onsite engineers told us that they intentionally designed the vehicle to be effortless for those new to the brand.

We drove the Fortwo Electric Drive nearly 60 miles around Miami and Miami Beach, and it's not only enjoyable to drive, but it's far less stressful to drive than most everything else. In a typical traffic jam scenario, you're just more tense when behind the wheel of something that's either expensive or large. Heaven help you if you're in something that's both.

Suspension and ride quality were better than we expected, handling pot holes and the occasional curb (kidding!) with aplomb. We also noticed that surrounding drivers were just friendlier. There's something not quite as enraging when you see a Smart signaling to get in as a lane drops. You think: "Aw, that's so cute! He wants to get in my lane, but I mean, it's barely taking up any room on the highway, so I'm not even going to honk." Or, so it seemed, anyway.

The visibility is fantastic, too – far and away superior to most sports cars, and on par with most small SUVs we've driven in the past year. The cabin was impressively quiet for the price point, and it showed plenty of oomph when accelerating from a stop. No, the 0-60 (or 0-100, for those who thumb their noses at miles) time isn't anything to write home about, but remember: you're driving this in the city. You'll be lucky to ever surpass half of that speed.

The easiest way to remind yourself that you're in a tiny car is to do a U-turn. The 22.8-feet turning radius is hilarious. We're already dreaming of finding a small parking lot in the winter and doing doughnuts until nausea sets in. For those who detest city parking, the Fortwo Electric Drive is a breath of fresh air. The only thing more capable of squeezing into a spot is a motorcycle, and let's be honest – those aren't super exhilarating in the rain/sleet/snow.

It's a shame that Smart isn't ready to talk pricing, but we were led to believe that it'll be sold at or below the price of the outgoing model. That's largely due to the steadily sinking price of batteries, not to mention increased competition in the electric car space. We're expecting lease rates to hit well under $200 per month, and it should be noted that most of those buying a Fortwo Electric Drive will opt to lease. The vehicle has a 60,000 mile (or 8 year) warranty on the battery system, which ensures that it retains up to 70% of its original charge. This 2017 edition should hit dealer lots in the US and Europe next spring.

At that mark, it's a compelling option for urban commuters. It's really easy to spend nearly $200 per month on public transit when you're rolling in and out each day, and here, you get the added flexibility of actually having a car in your driveway. Which, you know, can be super useful.