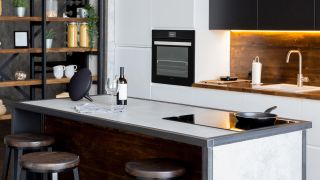 Following the deluge of voice assistant-supported gadgets for the living room announced at CES 2019, the kitchen is set to be this week’s battleground for the connected home, with the Living Kitchen expo taking place in Cologne.

First out of the gates with an unveiling this afternoon is Sharp, who has taken the wraps off their new Smart Works with Alexa range.

The new range consists of a 75-litre oven, a four door fridge/freezer, a smart dishwasher and a 10Kg washing Machine, with all four products supporting commands via Amazon’s omnipresent voice assistant.

The ES-HFT0148AZ washing machine, however, looks like the pick of the bunch. Its list of Alexa skills include being able to activate 22 specialist stain-fighting programs, which include a dedicated chocolate-shifting option that will likely prove popular with parents of spoilt kids.

There’s also a neighbor-friendly low-noise 'Nightwash' option which can delay the spin part of the cycle for up to ten hours, along with a super-fast 12-minute wash and dry cycle as well as an anti-allergy functional.

Outside of its Alexa features, the ES-HFT0148AZ also boasts an auto dosage feature, which can automatically calculate and distribute the right amount of detergent and softener for up to 20 washes. There’s also built-in Amazon Dash, which tracks your usage and automatically orders your washing liquids of choice so you never run out.

Elsewhere, the KA-70S50ISW oven has 150 auto-cooking options that can be activated hand-free via Alexa for automatically setting temperature and cooking times for a long list of recipes. There’s also programs for grilling and browning dishes, and a dedicated pizza function for baking. The oven also has a 'Boost' function which Sharp claim cuts down pre-heat times by as much as 50 per cent.

While the SJ-F1526ESI-EN may not have a full-color touch screen like some rival smart fridge freezers, it does at least boast a number of handy voice-activated smarts. Its 'Quick Drink' feature will chill bottles and cans in minutes, while its clever zoning system lets you convert one or both of your freezer compartments into additional fridge room.

Tell the fridge to go into Super Cool mode and Sharp says it’ll have your groceries reach their optimum storage temperature much more quickly as you unload from your supermarket run.

Finally, providing you and your Amazon Echo or Echo Dot are in range, you can command the QW-HD65F444A dishwasher to kick in while you loaf on the sofa. Sharp claim its ability to get a full load of four place settings sparkling after just 14 minutes makes it the fastest full-size domestic dish washer currently available.

Sharp’s announcement means they join a growing list of white goods makers adding voice controls to their appliances. There’s no word yet on whether Sharp will follow suit with rivals such as LG and Whirlpool in also supporting Google Assistant as well as Alexa.