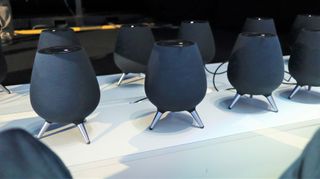 Remember the Galaxy Home, the smart speaker unveiled by Samsung back in August? It hasn't yet gone on sale, but reports suggest Samsung is working on a companion speaker for it – quite possibly a mini Galaxy Home designed to compete directly with the likes of the Google Home Mini and the Amazon Echo Dot.

The news comes courtesy of some digging by SamMobile, which has discovered Samsung is working on a speaker product with the model number SM-V310. We know it comes in black, but that's just about all we know for the time being.

Considering the Samsung Galaxy Home we saw earlier this year (model number SM-V510) has a relatively large form factor, eight microphones, directional audio and high-end AKG tech inside it, it's a reasonable assumption that Samsung might also try and fit in something that's a bit less capable and a bit cheaper.

All eyes on CES

We don't know how much the main Galaxy Home is going to cost yet, or when it's going to actually go on sale, but we might see both speakers break cover at the CES 2019 tech expo happening in January. Samsung usually has a strong showing at the event, and it's the perfect place to show off all the gear arriving over the next 12 months.

No doubt Samsung will have taken note of another busy Christmas in the smart speaker market – so many people were unwrapping and setting up Amazon Echo speakers in the UK this year that the Alexa system was briefly overwhelmed by the demand.

With the Echo, Google Home, Apple HomePod and Sonos speakers already well established, it's not going to be easy for Samsung to get a slice of the market with its own Bixby-powered devices – however it seems that it will be taking on the competition with more than one speaker when the time comes.