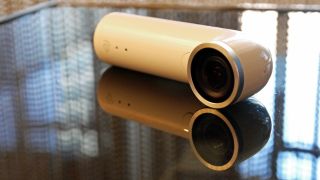 HTC is reportedly working on a new version of its Re camera. You know, the one that looks like a miniature periscope.

A report in the Taiwanese press quotes HTC's North Asia president Jack Tong as saying a new model will be launched in 2015. The new Re camera will, like the original, act as a standalone device allowing HTC to expand beyond the smartphone market.

The current Re shoots 16MP photos and records Full HD video to a microSD card. Its unusual design means there's no screen but HTC has engineered it to work with a smartphone or tablet through Bluetooth and the RE companion app.

The $200 camera is available to buy in the US but hasn't yet appeared in the UK. It's set to go on sale in Taiwan today.